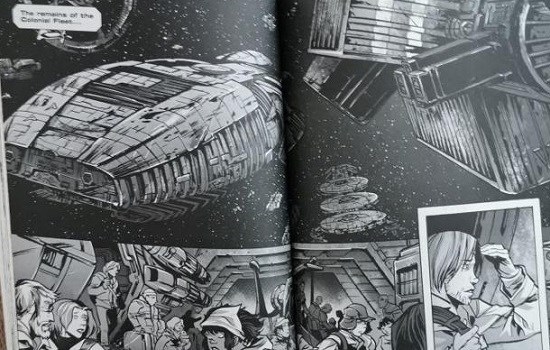 Firstly, let me start by saying that Battlestar Galactica: Echoes of New Caprica is one for the fans only.  If you haven’t seen BSG and are thinking that this might be a good starting point then you would be wrong.  You won’t have a clue what’s going on so leave it on the shelf.  There also may be some spoilers so if you plan on watching the series one day, be warned!

At this point you might be wondering if the Sci-Fi channel have hijacked TokyoPop and to be honest, so am I.  I’m looking over at Kevin's Star Trek: TNG - The Manga review and I'm wondering what in hell is going on over there myself.  All I know is that I've finished reading this monstrosity and I have to write a review on it.

With that out the way, let’s get on with the review...

BSG: EoNC is split into 3 parts - all with their own art style and stories based around the events on New Caprica from the series.  The stories themselves are designed to expand on certain events that are briefly covered in the series and their aim is to fill in the gaps in certain places while blatantly re-writing aspects in others.  The stories involve Laura Roslin and the make-shift school that she sets up on New Caprica, the trial/execution squad back on Galactica, and Kara Thrace's brief foray into family life with her new found "daughter".  The problem though is that the areas where the manga tries to fill in the gaps are just plain dull, while the re-writing paints certain characters that are completely out-of-keeping with their counterparts in the series.  A series like BSG owes much of its success to the dark and edgy script, so for a manga to even have a hope of standing up to compliment it, it's going to need to have something equally special.  This unfortunately doesn't.

The artwork is unique to each of the three stories and while it isn't terrible, it never really stands out either.  I could pick out one two-page spread that looks impressive; where the artist has spent time and thrown in some flare but its marred by a book that's overwhelmed with rushed, generic-looking panels.

What really strikes me as odd about this whole affair is that I'm not sure where the market for this kind of manga is.  There's already a range of popular BSG comics published by Dynamite so I don't know what TokyoPop was going for with this, other than to rush out a lose tie-in to the BSG franchise.  Now, I'm a big fan of the series but there's nothing in these pages that comes even close to convincing me to recommend this.

In the wise words of Chief Wiggum;  "Move along people, there's nothing to see here... No wait, look! There's a flaming train wreck!!!"

2
There's none of the edgy darkness that we've come to expect from the series.