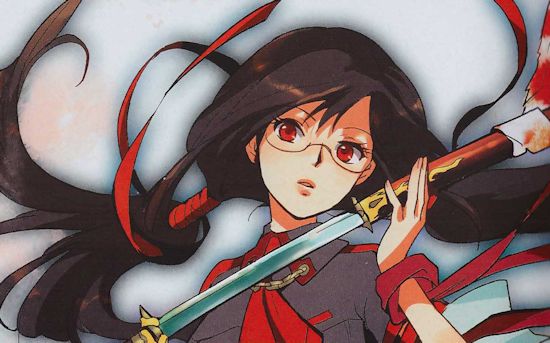 The Blood franchise is one that still carries a decent amount of cachet around it, and this year will see its latest iteration, Blood-C, attempt to take the UK by storm, with Manga Entertainment releasing the anime series on DVD and Blu-Ray while Dark Horse Comics take on this manga adaptation of the story, Clamp character designs and all.

At the heart of Blood-C is Saya Kisaragi, a clumsy but cheerful and hard-working shrine maiden with a doting father, a group of great close friends and all the coffee she could possibly hope to drink thanks to a cafe near her home. While her friends might be bored and frustrated by the sleep, isolated town in which they live, Saya seems to love everything about it and each day is full of enjoyment for her.

There is, however, a darker side to Saya's life and work, as she's also tasked with slaying terrifying creatures that crop up here and there known only as the Ancient Ones - something that she's surprisingly proficient at given her normal clumsy antics around town. As the nature of the Ancient One's attacks intensify and become more distressing, suggestions begin to emerge that there are deeper forces at play here - just what is the Covenant that one of these creatures mentions? And what are the strange, vague memories that plague Saya's subconscious?

Having already seen the Blood-C TV anime series when it streamed to the UK at the time of its Japanese release, it's both interesting and jarring to see how this manga adaptation of the story treats its subject matter. In both forms, the early part of the series spends a lot of time on Saya's daily life and setting up the idyllic life surrounding her, yet this first volume of the manga goes even further in marginalising Saya's struggles agains the Ancient Ones to the point where (final pages of the volume aside) they barely warrant a mention.

Unfortunately, without this blood and guts action (which this manga struggles greatly to recreate), much of Blood-C's early story-telling is as repetitive and dull as its location - there's a method to this madness ultimately, but if you're new to the series and don't have the prior experience to allow you to try and pick up on its subtle undertones it makes for tough going.

As a result, this opening volume of Blood-C is a curious one - as a companion piece to the anime series it's acceptable if unspectacular, but as a standalone way to enjoy the story it's a really hard sell from these first few chapters that does nothing to draw you into the concept or characters. Even its artwork can be characterised as "okay" - it's functional but never particularly eye-catching, not helped by the aforementioned insistence upon shying away from a lot of the action.

In terms of this English translation, Dark Horse Comics have done a good job here, keeping the volume's colour pages intact and offering up a decent print quality and translation, complete with brief translation notes where required, which we can't really fault.

If you're keen to get your fill of this latest take on the Blood franchise, we'd really recommend sticking with the anime when it arrives in the UK rather than this manga adaptation - simply too much of what makes the series what it is has been glossed over here, and if you're new to the series you'll miss its more nuanced moments which effectively renders it a prisoner to its own mediocrity.

5
It has plenty of room to grow in later volumes, but this opening instalment of Blood-C is dull and lifeless and offers little evidence that it can bring home the story's later impact.
COMMENT AND DISCUSS
blog comments powered by Disqus