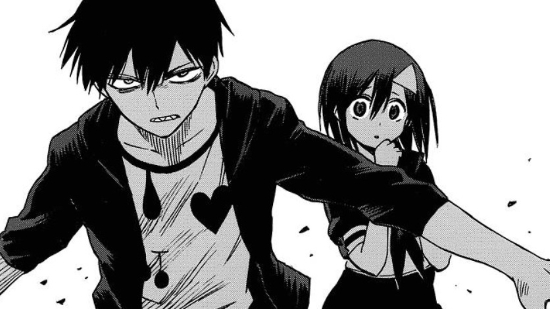 I reviewed volume one of the Blood Lad manga from Yen Press last summer - good but not great, solid if not superb, it's a clean and competent shonen adventure story... and appropriately enough for a vampire manga it seem to have readers in its thrall, as at the time of writing the Blood Lad  manga is already available in English up to volume five - and as Blood Lad's volumes are double-sized that means we've had the equivalent of ten tankobons of content released in less than two years. That's a prodigious output rate that even Bleach and Naruto would struggle to keep up with. In cutting open Blood Lad, Yen Press are positively drenching themselves in arterial spray - not only do we have the manga itself, but the Brain's Base anime version, formerly only officially available for streaming in the USA via Viz Media, will be coming to us in the UK through Anime Limited; and Blood Lad has not only been popular enough to have its own spin-off manga Bloody Brat, it's been popular enough to have the spin-off brought out west - a very rare occurrence indeed when you sometimes have to fight for so much as clean opening animations of a DVD. As the second volume of Bloody Brat is now also available, it's appropriate to have a look at the first volume of the series to give us an idea of what we can expect in the follow-up. Yen Press evidently have a great deal of confidence in the Blood Lad franchise, but is Bloody Brat a close relation or has the diminutive title made it the runt of the litter?

Bloody Brat is an anthology edition, collecting together disconnected gag-strip four-panel manga and short side-stories that accompanied the main manga in the Young Ace manga magazine. "Spoilers" are not really that big a deal for an uncomplicated manga like Blood Lad, but these side-stories do involve characters and take place during situations that do not appear until late in volumes one and two of the main manga - however, there are no shocking revelations or big reveals in these side-story tales so even if you're not that far advanced in the manga you don't need to panic about any hidden hand of a character's secret motivations being tipped to you.

Equally, even though you'd naturally expect a spin-off manga to be dedicated to the fanbase and so opaque to an outsider, Bloody Brat is actually very accessible to new readers. I am not an active Blood Lad fan - I haven't followed the manga at all since reviewing the first volume and I don't dip into it regularly - but even so I had no difficulty following what was going on in Bloody Brat. Almost all of the jokes speak for themselves within the context of the images that are presented to you, and other than a situation where Staz uses his blood to sustain Fuyumi's ghost, the comics do not rely upon referential humour. The comedy is broad enough (or Blood Lad's characterisation is shallow enough?) that anyone can enjoy it.

Is there anything to enjoy, though? While Bloody Brat is not laugh-out-loud funny, it is gently humorous with light-hearted and easygoing joshing and jocularity. While "undemanding" can also mean "lowbrow" - one of the stories is a literal poop joke, for instance - there are a few keen and witty observations (Bell gets fat because her enthusiasm for teleporting means that she never does any actual exercise) and a fun line in physical, visual humour (particularly the Frankenstein's Monster-esque Akim unstitching and restiching new body parts to himself) that makes everything pleasant.

The artwork which depicts this humour is also not drawn by the Blood Lad's actual mangaka Yuuki Kodama (although he adds a postscript message giving Bloody Brat his blessing in the back matter). Bloody Brat has been created by Konata Yoshino, a new mangaka just starting out in the industry - Bloody Brat is currently his only professional credit. On the strength of this, he's starting well - he's emulated Kodama's character designs well and while backgrounds are virtually non-existent Kodama is no great shakes in that department either. Yoshino isn't just a straight Xerox of Kodama though, and there is enough of a variation in style - Yoshino is slightly more slender and angular with a touch more shading than Kodama's clean chunkiness, which actually lends itself better to the action sequences - to keep the visuals interesting. We criticise so many manga and anime for having bland main characters just so that otaku can more easily imagine themselves in the fantasy of the roles if the characters are anodyne everymen... but however much we scorn these stories I have to admit, something like Bloody Brat makes me see their appeal. In addition to the aforementioned letter from Kodama, the additional material for this manga includes a gallery of title pages and a comic afterword from Yoshino telling us about how he was an enthusiast of Blood Lad and being known as a fan already familiar with the material is what helped to get him his break with the commission for the spin-off. Leave me for a moment, and let me drift off in the happy delusion that one day a publisher will read my fanfiction.net account and then come to me with a big stack of money to script season three of Gunslinger Girl...!

Settling down from my far-off fantasies, I can say that Bloody Brat is a solid work. Its humour tends towards inducing small smiles rather than provoking true hilarity, but that still leaves you with a positive feeling. Its accessibility is a great feature - a spin-off might seem to be an especially niche, but don't let it dissuade you as its appeal can be much wider. If you're looking for a quick, undemanding read which won't lock you into a long expensive multi-volume series, Bloody Brat actually proves to be quite a sweet boy.

7
Highly accessible to both newcomers and fans, this spin-off has enough momentum to curve away on its own path.
COMMENT AND DISCUSS
blog comments powered by Disqus