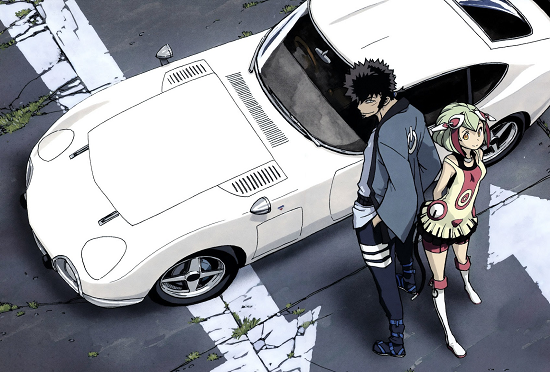 I should mention at the start here that I'm approaching this review from the position of a fanboy. I'm a huge enthusiast of Yuji Iwahara's work - he's probably most immediately recognisable as the character designer for Darker Than Black but his appeal has clearly stood out to me since the 2002-2005 manga King of Thorn reviewed by ourselves here (not the first he ever wrote - the 2001 miniseries Chikyuu Misaki had an English-language run from the retired DC Comics manga imprint CMX - but the first to reach the UK).

Amidst the 'sameface' of a lot of similar manga art (big eyes and small mouths make for faces that are hard to tell apart to the untrained eye) he's always stood out with a distinctive style, with cross-hatched shading giving everything a more natural, pencilled hand-drawn sketchiness and thus lots of vitality and responsive depth to shape and form. Yuji Iwahara also appears to be quite the Anglophile as, from King of Thorn being set on Scottish islands to an Englishman founding the school in Cat Paradise to MI6 agents having key roles throughout Darker Than Black, his stories are thick with British references and, well... it's rather pleasant to see the old country being spoken of so highly, really.  It's not so prevalent in Dimension W sadly but there is still a hint of it if you know where to look, with one character driving a Morgan 4/4 roadster, from an exclusive retro-styled British marque.

Nonetheless even if a favourite feature has been dialled down I was still excited to see Iwahara back on our bookshelves with Dimension W. It's his longest-running manga to date, published since 2011 in Square Enix's range of Gangan magazines. Dimension W also has an anime version with a broadcast dub available to watch on the Funimation Now online streaming service, and it has been acquired by Anime Limited for a video release at a date yet to be set. The Dimension W anime is interesting because it was a direct co-production with Funimation rather than them simply buying the distribution license, displaying a lot of confidence in the material. I've pleaded with manga and anime companies to have better cross-promotion for years and I'm glad it seems to have finally taken root, with an advert for the anime in the back of each volume. Unfortunately the anime version came in for some sustained criticism during its initial broadcast, prominently because of a rushed pace that tried to cram far too much into a single cour. That was a shame to hear, but the original manga of course has no runtime or commercial breaks and we can read it at our leisure, so it shouldn't suffer from this problem. I'm thus sitting down to Dimension W without preconceptions, to fairly answer the question of whether Iwahara's latest story merits my continued interest in his work.

As oil steadily depletes, renewable sites are filled up and cold fusion remains a pipe dream, resolving the oncoming energy crisis seems to be as intractable a problem as ever and only the wildest unrealities of sci-fi can dream up an answer - even gore-drenched demon-slaying heavy-metal Doom of all things was preoccupied by this unspoken dilemma in its latest game, and if mincing devils with rusty chainsaws can be interrupted for worries about keeping the lights on you know that it's a serious issue indeed. Fortunately Dimension W has the solution. The energy crisis has been solved through the efforts of the corporation New Tesla Energy and its revolutionary device, the "coil". Coils tap the potential of the fourth spatial dimension beyond the 3D world we inhabit (if X is breadth, Y is height, Z is depth, then 'Dimension W') to provide clean, unlimited energy to the whole world. Nowadays practically all technology on the planet from cars to aeroplanes and from watches to national grids are powered by coils - and they all belong to New Tesla Energy, now the most powerful organisation on the globe.

New Tesla Energy strictly regulates coil distribution and throttles their output to prevent the dangers of unchecked power from erupting explosively, but that still appeals to the underworld so and there is a lively black market in stolen, jailbroken and illegally-manufactured coils. To try and keep a lid on this embarrassment New Tesla Energy pays bounties to 'collectors', a colourful rogue's gallery of mercenaries who retrieve illegal coils from the criminals who use them to power their schemes. One such collector is Kyouma Mabuchi - a crusty throwback who in the bright, pristine world of coils still insists on driving a fume-spewing petrol car and throwing away leaking acid batteries. Kyouma's not just a Captain Planet villain though but someone who knows that there's no such thing as a free lunch and has seen for himself the dark deals New Tesla Energy made to create the coils. Recapturing illegal coils is one small way to make up for his past entanglements with the grim secrets of Dimension W, but when he encounters an uncannily lifelike and independent robot while chasing down some coil-swiping crooks some of those old ghosts may be coming back to haunt him. This gynoid, calling itself Mira, is fully sentient and far more sophisticated than any other robot in existence - which indicates that it might be a project of Dr. Yurizaki, the former chief researcher of New Tesla Energy who's been missing for two years - and thus she's hot property who a lot of people want back, with Kyouma in the crossfire.

I'm pleased to report that Yuji Iwahara's art remains as appealing as always. It is full of lively, enthusiastic, expressive personality. He has a good eye for design with near-future styles of clothes and technology which are credible evolutions of current trends (I like Skyhart's bird-tail hairdo, which suits her theme). Where a lot of manga backgrounds are squared-off urban boxes, filtered photos or just plain nonexistent, his hand-drawn environments can contribute as much character as the people in them (I especially enjoyed scenes where Mira visualises scenes from books she's reading as computer projections), and they also enable a dynamic use of lighting which really comes into its own in volume three when the cast decamp to a spooky mansion for a murder mystery. This actually really suits Iwahara's shading - his long thin hatching easily stretches into sunken cheeks and distended screams.  Scenes set during storms with fat droplets running down the character's faces, and the bitty dust of frozen smoke when surveying a hologram, also stand out as strokes of accomplished detail.

If anything, Iwahara may be too good at bringing different moods to his art. You have to be prepared for some very abrupt and uncomfortably jarring tone shifts in Dimension W. At first it seems to be a light-hearted sci-fi action-adventure, as Kyouma is a wisecracking vagabond drawn with shades of Samurai Champloo's Mugen who fights using kebab skewers that line his jacket; but as the saying goes it's all fun and games until someone loses an eye.There's a colourful confetti carnival of a museum heist which ends in some hideous soul-shredding monstrosity warping out of the twisting nether, and then Kyouma is cuffing an arc's villain with an all's-well-that-ends-well feeling just in time for a flashback to schoolboys being bullied to death and a psychotic mother chopping off her son's hands with an axe before immolating herself. It can wrong-foot you. I shouldn't overexaggerate this and say that such scenes dominate Dimension W but in this neon electric adventure you do have to set some candles aside for the occasional blackout.

The two leads do shine out in that darkness though. Kyouma and Mira do have a fairly traditional but nonetheless strongly-drawn odd-couple relationship (Kyouma's not the first guy to have his partner tidy up his meticulous mess, I'm sure) that begins with a bang. We don't even know Mira's a robot (well, other than the cover of volume one with circuit board patterns all over her skin giving it away) until a surprise reveal of her tail of cabling snapping out as she hefts up a villain; and because Kyouma's initially convinced that Mira's just a drone being piloted by a remote operator his determination to chase her for the illegal coils he wants to recover also has an engaging forthrightness that dispenses with the stuttering adolescent awkwardness of so many high-school protagonists - it's great to have a grown-up as the lead, and if his irascible-old-coot-who-means-well-really act is familiar it's good to see someone with developed technical skill employ them in chasing his marks. While I don't know how Mira will eventually react to the suggestion Kyouma killed her creators... hold off on the angry emails, everyone, this isn't a spoiler - Dimension W doesn't actually say it at any point but come on, it's so obvious they shouldn't have even bothered with the shadow over his face (but not his spiky hair). If it turns out not to be Kyouma after all I'll eat my hat.

Anyway, that's a question for a future volume outside the scope of this review and in the meantime... Goddamn if Mira isn't as cute as a shiny new button on a teddy bear's waistcoat. Her pouty sighs, her ingenious swishy aerial-tail (which also gives her perky shocks like the catgirls in Utawarerumono), the adorable little ditty she sings to herself when clearing up Kyouma's garage, her struggles to maintain her neutral inexpressive 'robot face' when pretending to be a cheap basic droid, her being petrified of g-g-g-g-g-g-ghosts despite being an ultra-scientific machine, she's... moe. Oh God, she's moe. Have I found mai waifu?

While I just want to bundle up Dimension W and love it forever, can I admit to any other flaws?  Well, the acronym for the New Tesla Energy security department "DAB" is a bit dainty and silly. There is quite a great deal of exposition in these books explaining the functions of the coils which might feel like padding, but the coils themselves do make for a more interesting sort of MacGuffin as ticking time-bombs with unpredictable supernatural effects, and while it make for pages of nothing but dialogue the villains explaining their plots actually do sound like interesting chicanery. Nonetheless, I do have a concern that Dimension W might get encumbered by too much capital-P Plot and that'll be something to watch for in future releases.

I will still nonetheless be interested in following those future releases to see how that plays out. Dimension W trips over an uneven tone in a few places and the weight of plot makes it slow to the mark in others but makes a good recovery to lead a merry dance across an electric cityscape and marks another success for Iwahara.

8
Good art and fun characters charge Dimension W with limitless energy like the coils that power its world.
COMMENT AND DISCUSS
blog comments powered by Disqus