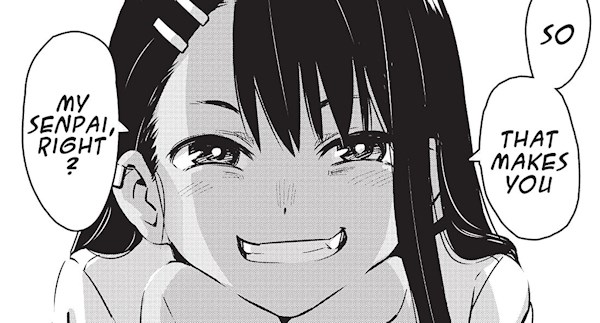 Don't Toy With Me Miss Nagatoro

Seriously though, Nagatoro takes the cheerful teasing of Uzaki-Chan and turns the dial to fill tsundere, as Nagatoro ruthlessly bullies her poor senpai. The poor sod miserably puts up with it because, compared to other bullies, Nagatoro isn't quite as bad. He first catches her eye when he drops his home-made manga in front of a group of girls, all of which deride him for his efforts, but Nagatoro has a subtly different reaction, initially going quiet and then ripping into him - in a vaguely constructive if over-the-top manner.

The whole point of course is that she really is impressed by him but can't articulate her feelings in a mature way. As such, she teases him mercilessly throughout the book, with little moments of genuine emotion piercing the veil from time to time. In this the book is actually quite fun, with a few of Nagatoro's pokes even backfiring on her, none more-so when she calls him from the bathtub but doesn't realise it's a video call. The expressions on both characters is utterly priceless.

I love the art on the series, it's a large part of what makes the book charming instead of irritating. Expressions are absolutely spot-on, with Nagatoro being both cute and mischievous at the same time. Her mischievous grin denotes pure evil, her true feelings betrayed by her flushed cheeks. It's flirting of the worst kind. The between-chapter sketches showing her second-guessing herself are wonderful.

It's a little harder to read than Uzaki-Chan simply because the character interactions are just that bit more awkward (though that much rewarding when you see the genuine affection leak through the facade). But that's the point, it's the sort of cringe-comedy that you see in British comedies like Peep Show and The Office, only this time it's all concentrated in one place and the affection, while real, is completely at odds with the cruel torment being dished out to our hapless protagonist.

Speaking of, our senpai isn't completely useless, which is always a bonus. I could tolerate the cringeworthy unwanted affections being bandied about in Rumiko Takahashi's Ranma 1/2 because Ranma could be a gentleman when he tried hard enough, and he was a talented martial artist. Here, our main man is quite the talented artist himself, which seems to be what earns him Nagatoro's unwanted attention. Probably my favourite moment in the book is when he agrees to draw her (under duress) and while she sleeps draws a beautiful portrait that earns him a kiss on the cheek. If the book can keep puncturing the pain with genuine moments like this, then I think I can keep reading with an element of optimism.

All in, there's a lot to like here. I'm sure there'll be another book just like it released next month, but for now I'm happy to buy the next volume. But let's not go full Isekai on this genre, okay Japan?

9
Hard to read for all the right reasons, this bizarre romance of the tsundere variety is tremendous fun!

LATEST REVIEWS
My Friend's Little Sister Has It In for Me! (Vol. 1)

Our Crappy Social Game Club Is Gonna Make the Most Epic Game (Vol. 1)