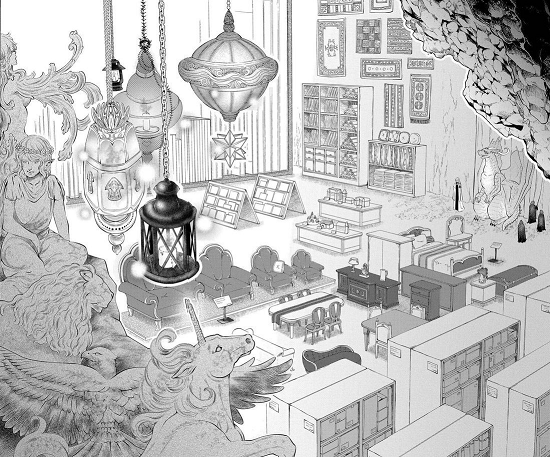 Last year I wrote a fairly negative review for the manga How to Build a Dungeon: Book of the Demon King, Seven Seas Entertainment’s response to Yen Press’s success with Overlord. Both titles inverted the fantasy conventions of a chosen hero saving the realm, taking a heel turn with evil sorcerers raising demonic armies to destroy it. Despite the interesting set-up though How to Build a Dungeon: Book of the Demon King was an uninspiring book with bland art and only superficial, unimaginative dungeon design; and while I’m certainly a red-blooded man who can enjoy free-spirited anime babes with jubblies bouncing happy and free, the copious sexual content in How to Build a Dungeon still failed to stir me because it suffered from the same problem as Freezing - everything these scenes were bedded into was so wretchedly, spitefully misanthropic that the whole experience just felt grubby. While these thoughts don’t seem to have held back How to Build a Dungeon in any measurable way – Volume 4 is on shelves now, so someone’s still buying it – Seven Seas do appear to have acknowledged the limitations of their first title because recently they published Dragon Goes House-Hunting, which against the grimdark of How To Build a Dungeon is a more sunny, comic look at sprucing up you foetid pit of vileness and menace. Is it a dream buy in a great location, or have we been conned with a ‘fixer-upper’ only fit to be condemned and demolished?

Letty is a dragon! A mighty, ancient beast, haunches rippling with fortress-crushing power, scales glistering with the wealth of and encrusted hoard of vaulted treasures, wings shredding the sky with the force of a hurricane, savage sharp maw engorged with the fulminous land-scouring inferno…

…or, a meek, weak, unassertive ground-snuffling overgrown lizard. For that is Letty, the fantasy equivalent of the unskilled suburban manchild. Finally, frustrated with Letty’s herbivorous, somnolent, mooching existence, his father kicks him out the dragons’ lair and leaves him to fend for himself out in the wild. That’s a rough deal for even the strongest monsters, as the World Map is filled with predatory bands of adventurers who see a fraidey-cat whelp of a drake like Letty as an easy target to gank for a set of Purple-Tier Dragonscale armour.  If Letty’s going to survive, he’ll need a place of his own that he can call home, but given the current state of the housing market you can’t just scrounge up enough money for a deposit on what’s found the back of the sofa, to say the least. If Letty’s not going to skimp on the land survey unwittingly choose a plot next to the adventurer’s tavern and other Location, Location, Location disasters, he’s going to need professional help. Step in Dearia, of Elf Housing Inc. – architect, Demon Lord, and estate agent. Can he overcome Letty’s timidity and inexperience to help the young dragon find his dream home?

I have to say that I’m tickled pink by the high-concept of Dragon Goes House-Hunting and I’m surprised that it hasn’t been done sooner. An Englishman’s home is his castle so we as Britons feel a natural empathy with Letty and his struggles to find a comfortable nest that suits his own needs; with current housing-market problems in the wider world you could even call it topical; and to arrange a viewing of a dungeon and have the agent enthusiastically promote how has its own unholy barrow of the shrieking damned as a value-add like the kitchen coming with dishwasher included, or that another place has several unsprung traps the way a building surveyor might report on rising damp, is a delightfully delirious topsy-turvy absurdity. There are times when that absurdity can get a little overcooked - for a manga about building houses Dragon Goes House-Hunting demolishes a lot of fourth walls, and if you spend too much time winking at the audience and saying how this is all stupid then they might just conclude that it is stupid, full-stop, and that you have a face-tic. However, I only felt this once or twice in the book and largely it strikes a good balance. The sense for the absurd also means that it makes some penetratingly post-modern comments as well: for instance, on the box-checking laziness of referential humour when Letty visits a haunted mansion and Dearia tosses him a Resident Evil-styletypewriter out of blue for no reason other than “those who know, know”; and showing up tropes’ inconsistencies remarking that no adventurer should want to raid a dungeon because all of the treasures and relics have rusted away over the centuries. It’s surprisingly observant for a silly comedy about a friendly dragon and his bachelor pad!

Fantasy stories often enjoy luxuriating in their lore but anyone expecting to be tucking into all the background history that a doorstopper of a swords’n’sorcery cycle can appendicise will be dissatisfied with Dragon Goes House-Hunting. This manga is a comedy: it’s not fussed with consistent world-building and is entirely anachronistic (characters will say that they’re not in a video-game world in one page but be checking RPG status menus in the next) but that’s not a consequence undisciplined writing but is still in service for the humour – for instance, Dearia the Elf demonstrates “summoning magic” by taking out his mobile phone and asking if a guy can come over. Letty is also characterised really as an overgrown kid – from being nervous with the fear of fear itself to getting fidgety when everyone else is engaged with building and wanting to help the big workmen (that he still outsizes by an order of magnitude!). Unlike How to Build a Dungeon not everything is solved by an infinite magical well.

Dragon Goes House-Hunting also contrasts strongly with How to Build a Dungeon: Book of the Demon King with its lack of fanservice. While the latter was stuffed with sex, violence and sexual violence, that’s completely absent in Dragon Goes House-Hunting; there are a couple of small bits of nudity when Letty encounters some bare-chested harpy bird-women but it’s not particularly sexualised – at the very least, dragons and birds don’t have compatible interfaces.

That’s another interesting thing about Dragon Goes House-Hunting – that Letty is, well, a dragon. That’s not so obvious a point as it first appears, because other fantasy stories often try to minimise that – whether it be light comic fantasy like Miss Kobayashi’s Dragon Maid or figures of genuine folklore like Fafnir, dragons are often able to take on human guises for the author’s convenience in scene-setting. Letty however is all-dragon, and Dragon Goes House-Hunting doesn’t shrink from all of the attendant problems that come with building a house for someone who is himself as big as a house, from breaking through the floor when you weigh a long ton to the difficulty of using umbrellas when your horns keep poking through them. The artwork of Dragon Goes House-Hunting is thus more realistic than you’d expect most manga comedies to be, dropping the soft open moé for detailed scales and bones. The one thing I didn’t like was that cowardly-custard Letty shrinks from the world around him so much that his face is often masked behind the vertical-bar gloom effect – you see more of his face half-obscured than it is open, which is not ideal for your main character. The heightened detail does mean that the art is not especially energetic – there are no wildly exaggerated cartoony double-takes – but it does speak well to the effort invested in it and as the humour of Dragon Goes House-Hunting is more sitcom than sketch it doesn’t hold it back and is good in a different way.

That’s also my conclusion to Dragon Goes House-Hunting. At a cheaper-than-average £8.99 this manga is light on your wallet as well as your heart, with a story that’s an atypical but still entertaining comedy fantasy manga written with a dry, literate wit.

8
We’ve gone through the looking glass to the strangest episode of Grand Designs you’ll ever watch.
COMMENT AND DISCUSS
blog comments powered by Disqus