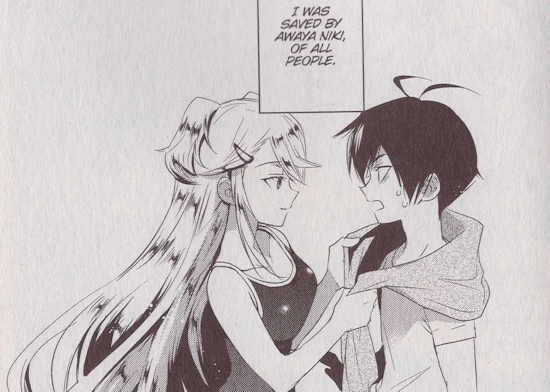 There are many reasons why anime and manga continue to focus on teenage life, but the awkwardness of teenage romance continues to be one of the primary reasons why this period of life continues to provide so much content - whether it's fumbled misunderstandings or the terror of even approaching the girl of your dreams who is so close at hand yet simultaneously so far away, drama is never far away during puberty when it comes to the opposite sex.

This brings us to Evergreen, the latest offering penned by Yuyuko Takemiya, whose most notable work (in spite of the more recent, and still enjoyable, Golden Time) remains Toradora, otherwise known as "the best romantic comedy series of all time" by this author. Given that intense love towards said work, expectations are high for Evergreen, so can it deliver?

Our protagonist for the series is Hotaka Yoshimatsu, captain of his school's manga club and, quite frankly, one of only two individuals who actually cares about this after-school organisation at all, to the point where the club's monthly magazine is almost solely penned by himself. Even then, Hotaka finds time for his mind and eyes to wander during club activities, and wander they inevitably do in the direction of the beautiful Niki Awaya, a member of the swimming club which practices below his classroom window. She is, to his eyes, the perfect girl, yet also entirely unattainable for Hotaka, who isn't exactly the athletic type.

The reason for Hotaka's reticent to engage in physical activity, and particularly swimming, isn't one of laziness however - his father died young of heart failure, brought about by a hereditary condition which Hotaka too suffered from, requiring open heart surgery and leaving a scar that he wants to hide from those around him.

Of course, this is a romance series and so this status quo doesn't remain for long - Hotaka is forced into a swimming session, which in turn sees him run into Awaya, scar on show and all. Surprisingly, rather than showing disgust at what she sees Awaya instead leaps into action to protect him from the gaze of other onlookers - a surprise powerful enough for Hotaka to inexplicably push away her help, which leaves him mortified at his own behaviour.

There are plenty more twists lying in wait throughout this first volume of Evergreen however - some brought to bear quickly while others are building more slowly towards revelations that we can look to expect in future volumes. There's also the question of Hotaka's loyal manga club confident On-chan, as one of a wider cast of characters who look likely to make any future romantic machinations all the more complex.

From its first volume, the biggest criticism which can be levelled at Evergreen is that it isn't particular good at keeping its powder dry - all of its twists are telegraphed a mile off, which decays much of the desire to keep reading as you know exactly what's coming and what its likely outcome will be. This wouldn't be a major problem if developments felt organic (something that Toradora was particularly adept at), but all too often any seismic shifts in the story feel forced by the requirements of the story. By the end of this first volume we can already make plenty of informed guesses about the enigmatic and mysterious Awaya, which effectively ensures that this mystique has been entirely dissipated in a less than satisfactory way.

On a brighter note, Yuyuko Takemiya continues to prove adept at writing fascinating characters - Hotaka isn't the most interesting guy in the world but his behaviour and hang-ups are all believable as a product of his health and family circumstances, and On-chan regularly threatens to steal the show as the true star of the volume in terms of both personality and keeping her cards closer to her chest when it comes to her own desires. Awaya's character is also well-played, and if only the writing had managed not to indirectly blurt out so much about her she would have provided a fascinating girl who you'd want to grab further volumes to read more about.

Moving beyond its story and characters, there's a lot to like about the presentation of Evergreen - all of its character designs are memorable and fit their personalities well (with On-chan again stealing the show as we see another side to her which is illustrated beautifully), and its art style hits a home run with everything it attempts. Here is a series which knows how to depict drama and comedy (with no shortage of wonderfully silly faces to bring any gags home), and even when other elements are floundering you'll still want to keep flipping pages to breathe in the visuals and the life brought to an otherwise simple setting by its artwork.

I'll be honest - I'm torn about Evergreen. Its setting and some of its story beats aren't all that original, but I've already fallen in love with all of its characters for various reasons, leaving me empathising with some, cheering on others and generally wanting to follow their various arcs through this story. At the same time, however, I already feel like I know too much about where the story is headed, which spoils some of its potential magic and lessens the impact of its dramatic flourishes.

This is, at least, an issue that can be overcome - if the journey that its likeable characters take is entertaining then its predictability may fade into the background as a major concern, or if the story has some bigger twists up its sleeve than I might be left pleasantly surprised. For now though, I will cautiously set out to wait for and read volume two to see if it can hook me entirely - it has the art, characters and potential to do so, but it's missing that certain something to turn it into something truly compelling.

6
Evergreen has a lot of promise with great art and characters, but needs to improve upon its narrative in future volumes if it wants to create something memorable.
COMMENT AND DISCUSS
blog comments powered by Disqus