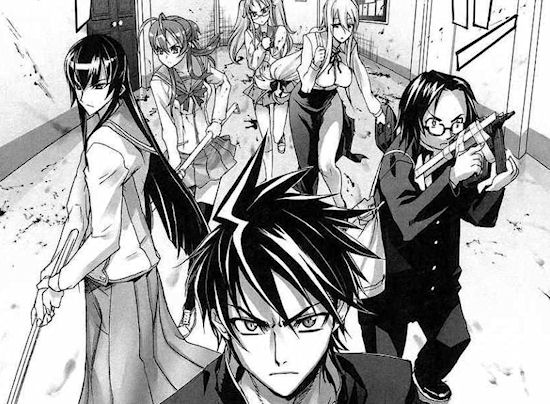 Highschool of the Dead Vol. 1

Given the enduring popularity of the zombie story as a kind of modern folk tale, it's amazing that it's taken quite so long for a full-blooded zombie apocalypse concept to make its way into the world of manga and anime.  Enter writer Daisuke Sato and artist by Shouji Sato, a two man team of brothers who have ploughed all of the usual furrows of the zombie fiction genre and given it the kind of Japanese twist you might expect.

Highschool of the Dead certainly wastes no time in setting out its stall, with the opening pages of this first volume from Yen Press dumping us straight into the action as zombies threaten our leading pair of characters, Takashi Komuro and Rei Miyamoto as they threaten to over-run the high school which they both attend.  Cue some bloody and intense violence involving zombie skulls, poles and baseball bats as a reminder of just why this release has a "mature" rating.

With the tone set by that slice of action this opening volume winds the clock back a little both to introduce its major characters, love triangle and all, before kicking off the impending zombie apocalypse from its very start through the eyes of Takashi as a disturbance at the school gate turns into death and disaster.  As panic breaks out amongst the students, a group of more composed and quick-thinking individuals soon stand out from the pack including the brainy supposed genius Saya Takagi and gun otaku Kohta Hirano, and as these "smarter than the average bear" types group together so the stage is set.

After getting this gang of six together, volume one of Highschool of the Dead largely preoccupies itself with their escape from the zombie infested high school that is their immediate surroundings before figuring out how to tackle the wider malaise that has infected not just Japan, but the entire developed world.  It isn't just zombies that become an issue either, with certain fellow survivors also look set to become a problem as further aspects of the manga's back story is hinted at, leading into a cliff hanger of sorts that splits the group in two as the volume ends.

The first thing that you might note while reading this manga is just how video game-esque its narrative feels, with frequent short but intense bursts of zombie-splattering action offset by periods of explanation or character development to keep the story movie forward.  This gaming aesthetic spills right the way down to the introduction to this volume, which lists the weapons available to our heroes and heroines as per some kind of first-person shooter.

Given that focus on blood and guts action, it probably won't surprise you to hear that Highschool of the Dead isn't exactly a "deep" outing - sound effects frequently threaten to outnumber words of dialogue on a page, and the story as a whole will be familiar to anyone who has ever watched a zombie horror movie.  This isn't meant as a criticism however - Highschool of the Dead's artwork is at its best in depicting its often spectacular set pieces, and there's enough mindless glee to be had from its depictions of violence against the undead with the odd glimpse of fan service (which is never overbearing incidentally) to keep things enjoyable throughout this predictable yet relentlessly entertaining first volume.

If you're a fan of zombie horror and a fan of manga, then this is a no-brainer with every pun intended - you won't want to miss Highschool of the Dead.  If you're a less hardcore lover of its genre, then a little more consideration will be required as to whether the opening volume of this series is for you; it has some nice character designs and fluid artwork in places, but whether this is enough to offset the "seen it all before" plot depends on whether you prefer to read manga solely for its writing or simply for some fun "downtime" at the end of a long day.  As a slice of simple, popcorn entertainment in printed form, this volume makes a pretty good show of itself.

7
Nothing ground-breaking here, but a volume of mindless fun that brings all of the gory entertainment of a zombie apocalypse to the printed page.
COMMENT AND DISCUSS
blog comments powered by Disqus