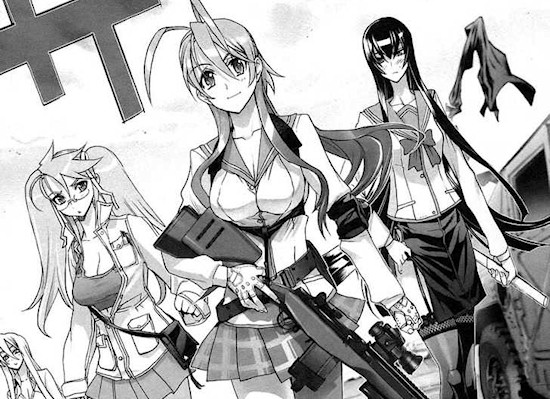 Highschool of the Dead Vol. 3

After a brief but decidedly fan-service laden break that occupied a hefty chunk of its second volume, our band of high school survivors in the face of a zombie apocalypse are now back on the road as we reach Highschool of the Dead's third manga volume - what's more, they're now equipped with a Humvee and a cache of potent weaponry... oh, and a young girl named Alice who they rescued at the end of the previous instalment.

With the properties of their newly acquired vehicle solving the problem of how to cross the city's blocked bridges, the next obvious question is - where to go next?  With Saya Takagi's house situated closest to their current location, this seems like the obvious choice, and all and sundry are buoyed by the fact that they seem to have found an area free from "Them".  But where exactly have they all gone to?  Needless to say, our group soon find themselves in a tight spot once again, only to find that more political issues become their most pressing concern as a potential safe haven gives rise to agitation amidst our survivors, while it becomes clear they need to make an important decision about their path moving forward.  Talking of politics, things don't seem to be going all too well on Air Force One either...

From an action-packed first volume, the second instalment of Highschool of the Dead saw a lot of the energy that came from that initial break-neck escape from the school dissipate - if you're hoping for a return to those adrenaline-pumping moments in volume three, you might end up feeling a little disappointed.  In fairness, the chapters on show here are by no means complete devoid of action, and we're treated to another of the franchise's excellent zombie-killing set pieces, but there's still more of a focus on other issues at hand in preference to the raw energy of blood, gore and smashing skulls.  Luckily, while volume two's idea of "more pressing matters" was watching the girls in the bath, volume three at least shifts much of its focus in the direction of dissecting the manga's characters a little further - it's nothing spectacular, but it does perhaps round things out a little in terms of giving our set of heroes and heroines a little more depth.

As with its previous volumes, this offering is slickly translated by Yen Press, and its busy, visually striking artwork continues to suit the subject matter perfectly as it goes about delivering over the top action and fan service in equal measure, which in itself does its bit to keep things ticking over as we move towards what looks set to be another cross-roads for the series in volume four.  This still isn't Highschool of the Dead at its best, and it could do with kicking things up a notch - hopefully this is simply the calm before a storm of zombie-killing par excellence.

6
It's an improvement over volume two, but still not enough of one to reach the adrenaline-pumping highs of its first instalment.
COMMENT AND DISCUSS
blog comments powered by Disqus