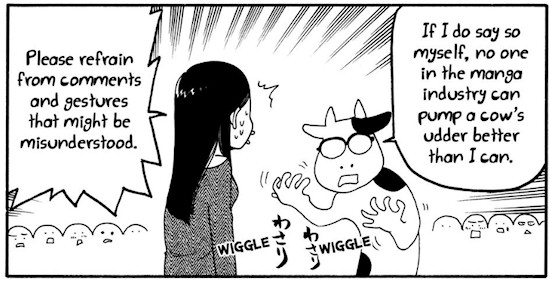 The prospect of reading another manga series by Hiromu Arakawa, the author of Fullmetal Alchemist, may fill your head with visions of great shounen action, strong characters and wonderfully realised worlds.  If so, think again, as Hyakusho Kizoku couldn't be further from the artist's well-known world of alchemy.

Instead, this series (which roughly translates as Noble Farmer) is an autobiographical work which focuses on Arakawa's rather unlikely past and childhood, where she spent seven years as a farmer as part of a farming family in Hokkaido.  Thus, this opening volume sees Arakawa discussing farming methods, the life of and schooling required for a farmer and perhaps most notably plenty of anecdotes from this particular period of her life.

Although there are some serious points to be found here, whether it's those aforementioned farming methods or the author's thoughts on politics as they pertain to farming (in particular topics such as Japan's self-sufficiency or rulings on output of milk and the like), it's those comic anecdotes that really allow this first volume of Hyakusho Kizoku to shine.  If nothing else, Arakawa has a fantastic manner of relating these stories for maximum comic effect, turning this volume into something of a gag manga at times as she mines her personal experiences to relate hilarious tales about her father, or delves into embarrassing or odd occurrences which happened to her directly.  Even the culture shock of the author's move to Tokyo to take up her career writing manga is delivered in an interesting and amusing manner given her unique perspective.

All of this is related within the manga itself as a conversation between Arakawa (depicted throughout as a bespectacled cow) and her editor, which is a rather dry way of framing the book's subject matter but actually stands it in good stead ultimately as it draws the reader into what feels like a cosy fire-side chat or banter over a good meal with a particularly entertaining friend.  Indeed, come the end of the volume I'd probably list Hiromu Arakawa towards the top of my list of manga authors I'd like to chat with over a few drinks, such is her easy-going, frivolous and light-hearted narrative style here which is entirely free of airs and graces - just as you might expect from a former farmer.

The only point where this particular volume loses some of its lustre is towards its final chapters, as Arakawa relates her time at an agricultural school - it's a discussion with the occasional bright moment, but overall it's a rare dull and repetitive moment that doesn't offer all that much room for comedy or discussion.  I suppose when you're constantly working or studying hard, there's little room to break out and have any interesting experiences.

Given its frank discussion of life on a farm and the difficulties of raising animals to provide or act as food, some may find aspects of the author's descriptions of farming distasteful or even upsetting - on account of her background and upbringing, it's no surprise at all to find Arakawa discussing having animals killed or shipped off to a slaughterhouse without flinching (although even she relates at least one scenario where the requirements of profit and running the farm as a business made for some emotional decision-making), but it may prove to be a little more shocking to the sensitive reader.

For the most part though, Hyakusho Kizoku's first volume starts out as a staid, dry discussion of farming life which quickly comes to life as it progresses - it's absolutely at its best when its author is sharing childhood or farming anecdotes and produces numerous laugh out loud moments thanks to them and the way they're related.  Its subject matter marks out Hyakusho Kizoku as a decidedly odd title - it never tries too hard in terms of its art style in favour of rough and ready illustrations and it's certainly unique in both its concept and outlook, but despite its autobiographical focus it never strays too far from providing good entertainment and some great humour.  It might not be the series that Fullmetal Alchemist fans are looking for by any stretch of the imagination, but for anyone looking to learn more about the author of that series there's a lot to be learned about both Hiromu Arakawa's life and personality here.

Hyakusho Kizoku is available to be read and purchased at JManga.

8
An autobiographical discussion of farming shouldn't be this entertaining, but Hiromu Arakawa shows an innate sensibility in delivering anecdotes and stories for maximum comic value.
COMMENT AND DISCUSS
blog comments powered by Disqus