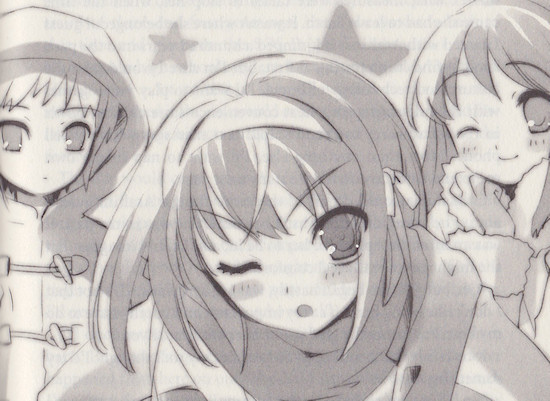 Intrigues of Haruhi Suzumiya, The

Since the marvels of arguably the high point of this light novel series thus far, The Disappearance of Haruhi Suzumiya, we've been treated merely to collections of short stories pertaining to the members of the SOS Brigade as viewed through the eyes of the ever cynical and world-weary Kyon.  If you've been a little bored of such trifles, thankfully the English language debut of The Intrigues of Haruhi Suzumiya finally gives you something a little more substantial to sink your teeth into.

Firstly however, this book finally takes it upon itself to tie up the loose end left at the end of Disappearance, with Kyon still needing to travel back in time once more to put the finishing touches to his actions and eventual success in that particular crisis.  If that sounds like the kind of thing that had been built up to majorly as the subject of a novel in its own right, then you might be somewhat disappointed to find that this is ultimately done and dusted simply as a prologue to the mainstay of the book itself - it certainly seems to be shrugged off as a largely unimportant aside in comparison to how it had been framed previously.

It's time travel that remains the focus of the main plot of Intrigues however, as Kyon finds himself in what you may call a rather enviable situation as he's visited by a second, near-future Mikuru Asahina.  Ignoring the obvious opportunities for fan-made doujinshi which arise from such a possibility, Kyon has little time to enjoy this situation as it is quickly revealed that our leading man himself has sent this Asahina back in time just over a week to prevent some kind of calamity.  But what calamity, and how?  Asahina is, as ever, entirely clueless about what's going on, having simply been bundled into a cupboard and told to take a trip back in time, and despite some concerns about Haruhi's mood Kyon has no idea what is required from his future self either.

Luckily, some sparse and often downright cryptic information from Asahina the Elder and the ever-trustworthy Nagato help to at least get things back on track, while this novel also introduces Tsuruya's importance to proceedings and the various elements which float around the periphery of Kyon's world, moving her well and truly from the status of a mere side character into someone potentially altogether more important.  It's the machinations of the groups behind the SOS Brigade's motley collection of aliens, time travellers and espers that take on a renewed and even greater role as the novel progresses, finally providing some answers to the mysteries that are built up to a huge crescendo by the opening chapters of the book.

Of course, the trouble with building something up for almost two-thirds of a novel is that its pay-off needs to be suitably spectacular, and in the case of The Intrigues of Haruhi Suzumiya... it isn't.  In fairness, there are actually two twists in this particular book's tale - one of which is as mundane as the ending to the infamous Endless End story, while the other is a potentially more gripping and exciting turn of events which is subsequently resolved and dispensed with so quickly as to make all of its build-up feel a little unnecessary.  It's enough to leave you feeling rather let-down by it all as the building promise within the book's story vanishes before you've barely had time to register what's going on.

Thankfully, this anticlimactic sense of disappointment is at least somewhat offset by the fact that this novel is, for the most part, quite a fun and entertaining read.  Kyon's acerbic wit and attitude isn't quite at its sharpest here but his narration still carries things along, and watching Asahina and Nagato go about their business always manages to be worthwhile.  There's also plenty of potential for future reward to come to long-term readers via this volume, as Tsuruya's ramped-up importance is eclipsed by the entry of other parties into the fray who it seems are very much in it for the long haul.  There is, of course, also time to wax lyrical about time travel, Haruhi's true nature and so on for those with a penchant for such things.

In spite of being the longest of the Haruhi Suzumiya novels thus far however, Intrigues certainly isn't the most satisfying of the bunch - even another decent English translation by Yen Press can't hide the fact that this is a second-tier effort compared to Melancholy and Disappearance, and it possibly also sits beneath Sigh in terms of its overall value to this light novel franchise as a whole.  Long-standing fans will be thrilled to have another opportunity to spend some time with their favourite characters (particular if you're fond of Asahina in this instance) and it's certainly an enjoyable read for the most part, but the rather damp squib that is the climax to The Intrigues of Haruhi Suzumiya makes it feel like a work of wasted potential come the end of the book.

6
The franchise makes a welcome return to telling a full-length story here, but all of its built-up feels wasted when partnered with such a weak climax.
COMMENT AND DISCUSS
blog comments powered by Disqus