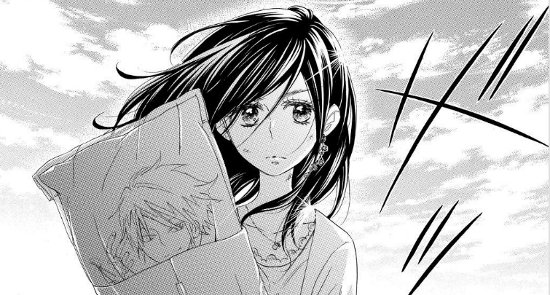 I haven’t read a good “reverse harem” series (which I am quietly a sucker for, shhh dont tell anyone) since Ouran High School Host Club, and I’ve recently become a fan of so-called "fujoshi" characters (blame Genshiken for this). The internal strife and vacillating in both cases tends to make for interesting reading, and so being told about this series recently added to Crunchyroll (and coming later this year in print from Kodansha Comics) hastened me to take a look.

Kae Serinuma is a pretty unassuming girl - a little overweight and very kind, but also a massive fan of boys love, yaoi, and all that good steamy stuff. After a shocking event she hides away in her bedroom, inconsolable and unable to leave for a whole week until she decides she is ready to return to school. While in hiding she loses a lot of weight, to the point that her classmates barely recognise her. Struck by her new svelte form four different boys ask her out on the spot and Kae, being rather guileless, accepts all of their proposals. Now she is saddled with four lads chasing after her when she would rather they chased after each other!

Let’s address the elephant in the room first - the use of anorexia as a plot hook is worrisome. Thankfully the series itself is careful in how it addresses the concept, neither lauding nor censuring the main characters dramatic change - it uses it at face value as a (crude, admittedly) method of effecting a transformation in the main heroine as well as helping shore up her fujoshi-cred given how little she cares about the change. What does help is that she is not portrayed negatively before the transformation - there is no demeaning or bullying of her beforehand, which helps soften the relative value judgement on display.  It also helps that the humour doesn’t lean heavily or spitefully on any weight gags, which I found refreshing. The most you get is her brother calling her “fatty”, and those characters who do exhibit any form of revulsion to her previous larger form are quickly brought under the microscope for character examination.

In fact, more issue is made of Kae being an otaku, particularly by herself.  A big plus point for the series is that while she experiences some initial pressure to suppress her interests in order to protect her newfound popularity, this goes out the window almost immediately. She is still the same person, sees no reason to change, and what has happened is just an exterior adjustment to her mind. She likes her hobby and thats it, and it is really nice to have a series explore this instead of going down the well-worn “high school debut” path of forced character re-invention, making this an interesting cornerstone for character drama and for obvious comedic effect. Of note is that all of her suitors accept this particular character trait really, really quickly. Some of them still have reservations (or don’t quite know what they have gotten themselves into) but this is a potential conflict that gets resolved with almost shocking ease, although it does stick around to fuel the comedy in the series.

In fact, everyone gets used to the harem setup really easily - the speed with which everyone slips into it is really spooky and honestly even harder to accept than the previous two items. Heck, all parties are fully aware of it and consent (sometimes begrudgingly) to the charade! Okay fine, suspension of disbelief is needed here for the purpose of comedy and drama, and at least this skips the tired “oh no, I have to live x separate lives to keep this lie going” storyline. I often asked myself how Kae manages to keep four boys in waiting - something not helped by the pacing as the series burns through most of a school year up to Christmas in eight chapters. While this helps the series efficiently hit key romantic times of year, it exacerbates issues with suspension of disbelief.

Characters have tried to call a halt to the status quo, but whenever this happens it has this gently fizzled out. The lack of rising tension or conflict is wearing, mostly as the series consistently passes up opportunities like these to kick things into high gear. Some lasting consequences and plot threads have started to take root, but for now the series seems content to coast along. One other thing that would be nice to have more of is the boys interacting with each other without Kae around - there are a few instances of this and they are great at fleshing out the cast.

Even with all these complaints in mind I was still glued to my tablet while reading as the series is damn entertaining. The cast are an engaging bunch and the romance is a great draw, but there is also humour present in spades. There are plenty of laugh out loud comedy moments, mostly of the “fish out of water” sort from the different members of the cast as they desperately try and get a grip on the bizarre situation they have all ended up in. There is a great sense of comedic timing on display here - the author knows when to exacerbate an absurd situation to breaking point and then give you the pay-off. I am an absolute sucker for comedy facial expressions and they are in full force in this series.

The art in the series also deserves praise. I usually find myself turned off by how reliant it can be on a number of its hallmarks - in particular the heavy use of screentone and uncanny character facial structures. Kiss Him, Not Me thankfully manages to sidestep these and, while it still has the odd panel where Kae’s eyes are the size of saucers, I can forgive it as it is used appropriately to enhance the humour or drama, depending on the moment. As mentioned previously there are some amazing facial expressions on display, and one thing I found myself drawn to in the art in particular was its careful use of lips. These spoke volumes about the character’s mood or reaction and struck me all the more as this is not something you usually notice in manga. The art is not without the odd small annoyance, the key one being that I had trouble at times telling the two white-haired male suitors apart - the fact they are both bratty and combative doesn’t help this!

I really enjoyed this series so far - the comedy is spot on and frequently had me laughing my head off. The characters are fun to spend time with. and while I was leery of the premise and romance aspects initially I quickly found myself dragged into it as it handles all of these aspects carefully and in particular avoids the unpleasant hallmarks that I often associate with shoujo romance. I can’t wait to see where the series goes from here - it has a ton of potential and groundwork in place to do tons of interesting stuff.

You can read Kiss Him, Not Me digitally via Crunchyroll. It will also be published from Kodansha Comics USA starting this year.

8
Boys (and girls), don't be put off by the title and give this a shot.
COMMENT AND DISCUSS
blog comments powered by Disqus