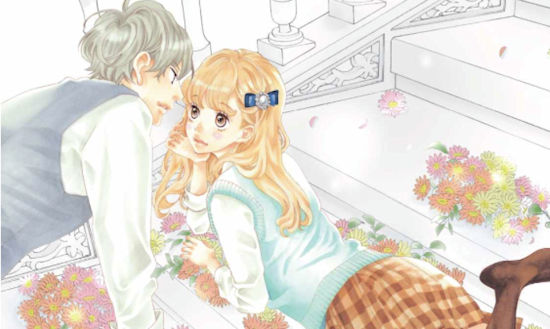 Kiss me at the Stroke of Midnight Vol. 1

Rin Mikimoto, fresh from her success on Love's Reach (which was adapted into a film) returns with her self-confessed "real-life Cinderella story" inspired by her experiences meeting famous people. It fits nicely with the celebrity-obsessed culture that pervades most countries, as talented individuals are showcased and idolised for their talents, rather than for who they are as people. In the current climate gripping Hollywood and even scandals here in the UK that have unfolded recently with the rich and famous, this is an interestingly innocent take on what it's like when an average girl meets an idol.

Is it still possible to believe in fairy-tale romances of this nature?

Hinana's big secret is that she loves fairy tales. Hiding her fictional romance novels inside textbooks to project a studious demeanour is rather cute, and her idealistic obsession with romance is what makes her character so interesting to read. As a man reading a book aimed at women, I enjoyed seeing the thought process and perspective of relationships from a female standpoint (one of the reasons I enjoy Kelly Armstrong's Women of the Otherworld series in fact) and I was rather taken with her as a character. Not overly confident but finding courage when she needs it, Hinana makes a thoroughly engaging protagonist and I admire the book for the way she's written.

Top idol Kaede, on the flipside, may act the perfect gent for appearance's sake, but he's obsessed with butts and a bit of a lech. While some may baulk at this, he's basically a teenage boy, and anyone who has met an example of this particular animal will be well aware that, especially at this age, boys are fascinated by the mystery of the opposite sex. His shamelessness in front of a girl is a bit odd, but makes him a memorable and flawed character rather than the perfect Prince Charming of the Cinderella analogy the book embraces.

Happily, I found Kiss me at the stroke of midnight to be a very endearing tale. Idol Kaede is a believable young man who delights in finding the freedom to be himself around someone he feels a genuine connection with, and likewise, Hinana's attempts to deal with her pounding heart around such a confusing young man comes across as genuine and somewhat delightful rather than subservient and unnerving, which is a line the book could cross quite easily given the subject matter.

On to the technical side of the book, the artwork is lovely. Character designs are sharp and delicate, but the range of expression (perfectly showcased on the back cover) brings a vibrancy and deftness of touch that has to be admired. Equally the heavy use of tone to shade the art gives the art a nice weight to offset the slender character designs. It has an old-school feel to it, but I love it all the more for that.

Backgrounds are used perfectly to give a sense of place, and receding when no longer required to allow for focus on the characters - this is a trick many manga artists struggle with, but from the first volume it seems to me that the artist is very accomplished in this area, making for a very smooth and satisfying read. Bravo.

I'm not overly familiar with Rin Mikimoto's work, but I will now be on the lookout for her other series.

Overall then, despite being a story that's older than even me, Kiss me at the stroke of midnight impressed greatly, so much so that the next two volumes are paid for and incoming. Hinana is a very likeable character, and with a second love interest on the way, things are only going to get more complicated as time (and volumes) move on.

9
If, like me, you're an incurable romantic, pick this up - it's a wonderful start to what looks to be a fantastic series.
COMMENT AND DISCUSS
blog comments powered by Disqus