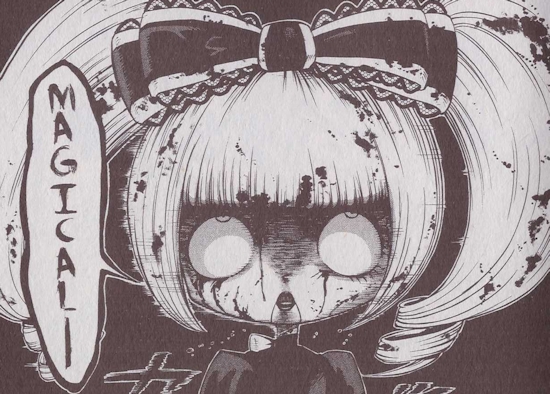 "Magical" - hardly a word likely to fill you with fear unless you had some kind of traumatic experience involving a cardboard cut-out of Paul Daniels as a child. It is, however, a word which quickly comes to serve as a chilling symbol of death and destruction in the world of this new manga series brought to the English language market by Seven Seas Entertainment.

For our protagonist Kii Kogami, life is dull, with days which blur into another and nothing to push this bored teenager into engaging with the world around him - such is his malaise that even the sight of his former childhood friend being bullied and her head dunked into a bucket of water is enough to rouse him into action.

Kii's wish that something would arrive to bring some excitement to his existence might just prove to be a wish he'll regret for the rest of his life, however, as the seemingly innocuous site of a diminutive gothic lolita girl appearing at the school gate turns into her outright horror as she then proceeds to obliterate the head of the teacher that confronts her. Before we know it, this strange-looking girl is literally flying through the classroom window, the resulting carnage punctuated only by her incessant screams of the word "magical".

Luckily for Kii, his bored gazing out of the classroom window allowed him to avoid this mayhem, but unfortunately for him this terrifying girl isn't the only horror in the vicinity - the entirety of Japan has been overrun by magical girls who are killing everyone in their path, turning them into zombies in their wake!

Yes, you read that right, we did just use the "z" word - for all of its "magical girls gone berserk" trappings, this first volume of Magical Girl Apocalypse is very much a dyed in the wool zombie story, which sees Kii escaping the violent chaos that has erupted at his school with a group of other survivors, only to find that there's nowhere to hide from the insanity that has literally descended from the sky out of nowhere. If you need a stick to measure this volume against other zombie fiction, the final chapter of the book ends with the group deciding to hole up in a shopping mall...

Where Magical Girl Apocalypse takes one step further than other stories within its genre is in the sheer extent of the brutality it explores - every page is a flood of blood and body parts, and no character is safe from the carnage, with new characters introduced only to be decapitated or worst a few panels later, and even some of the individuals these early chapters actually take some time to establish don't last more than a few dozen pages.

Such is the fascination with cutting up its victims in ever-more sadistic ways that the one thing this volume doesn't have any time for is much in the way of plot - we know that magical girls are pouring out of the sky to go about their crazed and gruesome business, but we know not why, and there's little time for any remaining characters to even ponder such questions.

There is something to be said for the frenetic pacing of this first volume as it sweeps you up in the chaos and forces you to surf along on the sheer manic energy of its detailed study of death, destruction and a billion different ways to slice up a human body. Once the ride is over however, you look back on what you've just experienced and come to the unsettling realisation that its little more than torture porn - quite literally at times, as the reader is asked to peer lustfully at a girl's panties while ignoring the inconvenient fact that it's effectively the only part of their body left intact. This opportunistic fan service in the midst of all that blood and guts brings forth comparisons with High School of the Dead, but that series at least felt like it knew how to make its panty shots and the like feel organic rather than ill-considered. In some ways it's hard not to be impressed by the way Magical Girl Apocalypse immerses itself in the depraved decadence of destruction, but future volumes need to introduce something resembling an actual story to prevent it from feeling like an exploitative work of lowbrow titillation.

It would be a poor choice of words to call the artwork within this opening volume of the series "beautiful", but there is a notable attention to detail and sense of violent power to everything these opening chapters depict - every panel is packed with a genuine sense of pain and horror, and this volume is absolutely a case of mission accomplished in those terms, and I suspect that the on-going depictions of ever-more elaborate deaths could well prove to be a compelling reason to keep reading the series on their own merit. With so much going on there's little time for talk, but the English localisation of this first volume seems strong and is without issue, telling you what little you need to know without being obtrusive or confusing. All of this is arguably helped along by the break-neck (with every pun intended) pacing of these early moments of the series, which gives you little time to breathe as new horrors unfold on every page.

Reading this first volume of Magical Girl Apocalypse is certainly an experience - not for the faint of heart, it's a horrifying and vicious affair that manages to be so relentless in its shocking outlook that it manages to pull you along and into its world with sheer brute force. This dark power certainly holds enough sway to keep us engaged for a single volume, but it's clear that far more will be required to convince us that the series is more than blood-soaked pulp fiction moving forward. The result of these musings leave us tentatively curious, but concerned that the series might be content to simply serve up its lashing of disembodied flesh and not try to develop an interesting core concept further.

6
Its detailed, no-holds-barred depiction of fast-paced death and destruction can hold you in its thrall while you're reading, but once you stop you'll find yourself wondering when an actual plot might develop.
COMMENT AND DISCUSS
blog comments powered by Disqus