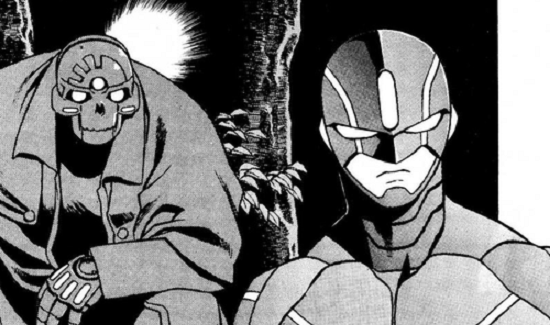 Hmm....This one's a bit of an oddity. On the one hand it's cheap as chips nowadays and a fun read, on the other its derivative and a little cheesy.

Okay, so starting from the top this is an action manga about a school girl suddenly attacked by one robot and saved by another programmed to protect her named Faust (hence the name Metal Guardian Faust). It all starts off in an arcade...sounding familiar yet? Yep, its like Terminator 2 but vastly inferior and with a few extra bits about robots and stuff thrown in.

The ar is very good, suitably dark but clear and easy to read. Its very comic-bookish. The lines are clearly defined and the shading is suitably detailed while not over the top. The robots could have been drawn a bit better though...

Sadly a major let down is that the book follows a strai line from one fight to another. It isn't much for throwing the odd curve ball or complicated plots. When something is this bog-standard, it's hard to find anythingto really discuss. It features fighting robots, looks ok and reads suitably well for a story of this genre.

Chances are that if you come across this series it'll be in a bargain bin somewhere. For a couple of quid it's a breezy and worthwhile read, but if you have to pay top dollar for it, avoid.