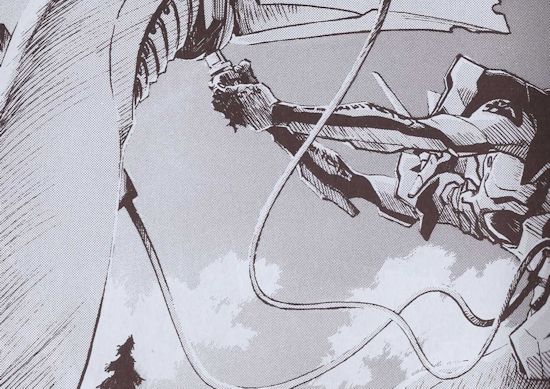 As well as releasing its thirteenth and latest volume of the series (which we also recently covered on the site), Viz Media are also taking the opportunity to re-release Yoshiyuki Sadamoto's take on Neon Genesis Evangelion in manga form via a series of "3-in-1" omnibus editions - what better time to brush up on or leap into the manga adaptation of this classic TV anime series?

If you're completely new to all things Evangelion then... well, I'd love to be formally introduced to the rock you've been hiding under for the past couple of decades.  Of course, Neon Genesis Evangelion is the story of Shinji Ikari, who finds himself thrust into the midst of a battle for the future of mankind between humanity's last defence via the organisation known as NERV, and the so-called "Angels" who seem hell-bent on triggering "Third Impact" and thus the destruction of the human race.

Upon turning up in Tokyo III at the behest of his father, Shinji is not all that surprised to find that he's been called upon simply his Dad needs him for something - even he is a little shocked when he finds that the requirement in question is for him to pilot an Evangelion, a giant biomechanical creature designed to take on the Angels in full-on combat.  What follows, even in these opening volumes, isn't just humanity's fight against these creatures, but Shinji Ikari's struggle with his own sense of self and self-worth in a world that seems to contain nothing but hardship for him.

If you're already familiar with the world of Neon Genesis Evangelion, even if it's only via the more recent first "Rebuild" movie, then nothing will particularly take you by surprise within these opening volumes of the manga - the major story beats are all present, correct and pan out as you would expect them to, which in all honesty is no bad thing given the quality of the source material even if we're still a way off hitting the real heights of the show's story.

That isn't to say that these volumes offer nothing new to Evangelion fans - both Misato and Shinji (both of whom feature heavily in these early volumes) see slight tweaks to their personality and behaviour compared to their animated counterparts, and in Shinji's case in particular the small changes made actually work to the benefit of the series at this point.  If you're of the school that Shinji is "whiny", then you may well be pleased to see him showing at least a little more backbone and a resigned cynicism which gives some strength to his character even if it doesn't necessarily make him more likeable.  These volumes also similarly seem to centre in on Misato's frailties much faster than the anime, rounding out her character quicker than in the original source material.  It's these small changes that will most likely delight the Evangelion fanatics amongst us, myself included, and getting to deconstruct these well-known characters in a slightly different way makes this first Neon Genesis Evangelion omnibus an interested read in its own right.

In terms of presentation, this new English release from Viz Media really can't be faulted - the three compiled volumes themselves are delivered crisply and cleanly with a good translation to allow for a full enjoyment of both the story and Sadamoto's character designs as he lavishes his love upon them, while this book also contains a number of colour pages as well as translated interviews regarding the Evangelion TV series with a number of individuals involved in its production, which in itself offers some fascinating insights.

The result of this is effectively a definitive edition of these first few volumes of Neon Genesis Evangelion - probably not enough so for owners of the original single volumes to dip into their pockets and buy again, but a great edition for anyone new to the series either as a whole or simply in its manga form.  Indeed, with the original TV Evangelion anime becoming increasingly hard to get hold of, there could be a whole generation who will appreciate this manga adaptation of the original story in lieu of the current crop of "Rebuild" movies, but whatever camp you reside in there's never been a better reason to dip into the world of Evangelion and start consuming it all over again.

8
Its content will be instantly recognisable to anyone who was watched the TV anime, but this first Evangelion 3-in-1 edition has sufficient differences and extra material to be a must-have for any fan of the franchise.
COMMENT AND DISCUSS
blog comments powered by Disqus