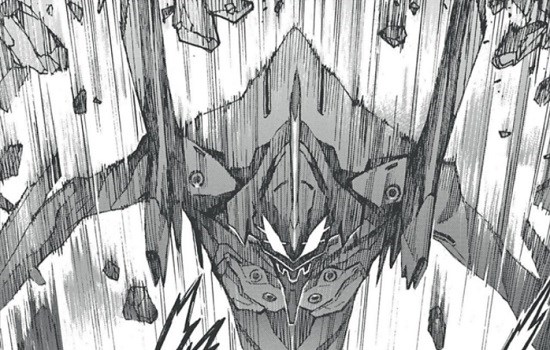 N.B. This review includes open and frank discussion of story details. The warning may not be necessary because I don’t believe that you can give away Neon Genesis Evangelion for an anime fan any more than you can King Kong for a cinemagoer, but such disclaimers are practically a statutory requirement on the internet, so: Spoiler Alert!

When Evangelion: 3.0 You Can (Not) Redo, the latest instalment in the Neon Genesis Evangelion “Rebuild” tetralogy, opened in Japanese cinemas in mid-November it grossed almost fourteen million dollars in its opening weekend. By any metric that is a bone fide bunker-busting box office smash. Such a tremendous take is not only good for an anime movie, but is the best performance in an opening week for any movie of any genre in Japan for all of 2012. Seventeen years after it was first broadcast, Neon Genesis Evangelion continues to burn brightly, achieving a self-sustaining critical mass – it’s no longer just a struck spark of a series, one that lit up the television and then faded away, it’s something that’s caught and now warms the whole industry.  Evangelion merchandise isn’t just limited to figurines and wall-scrolls – when your brand has sufficient cachet to promote everything from spectacles to razorblades, and its characters have even modelled for major Japanese fashion labels through the “Radio EVA” project, you’re no longer a niche, you’re a culture. Fashion retailer Zozotown says, “Evangelion melts into our days” – quite so!

As all of this paraphernalia is thrown up around us like gay confetti, though, the colourful fluttering pieces obscure some quieter, humbler things. Before the coffee advertisements and the branded hoodies, before the videogames and Revoltech figures, before spin-offs like Campus Apocalypse and The Shinji Ikari Raising Project, there was Yoshiyuki Sadamoto’s official tie-in manga of the series – Neon Genesis Evangelion, sans subtitle. It began in 1994, before the anime was even broadcast, to help raise awareness of the upcoming series... and while the Evangelion avalanche broke and thundered down upon us all, it has been the pebble now pattering down in the gully left behind. Under the shadow of the whole sprawling monumental edifice that has risen up around Evangelion, here is Sadamoto, with his hammer and chisel, still diligently chipping away at his little block, flake by flake. At this protracted stage, the artist in the act of creation is almost the artwork in and of itself.

Viz seem aware of this throwback atmosphere because there’s an endearing retro quality to their production of the volume - the thick black bars on the cover like a resized image, with the credits literally only a grain from the edge as though someone shaved the proof too close, reminds me of the old days. It was a time when companies like ADV Manga had to produce their versions by literally tearing out pages from the Japanese tankobons, blowing them up on a copier and Tipp-Exing out the speech bubbles before rescanning them!

Volume thirteen of the Neon Genesis Evangelion manga covers the events of the middle portion of the End of Evangelion movie. It depicts the end of SEELE’s attack on NERV, Shinji’s final sortie in Unit-01 and the beginning of Third Impact and the full realisation of the Human Instrumentality Project. The sense of drama at this climatic moment is dissipated by the fact that these events are being recounted some fifteen years after they were first told  - and yes, I know that I’ve been harping on about this all through the review, but for an Evangelion fan there’s not so much a sense of “hurrah, it’s here!” as there is “oh, finally!”

Some things are worth the wait, though. Sadamoto was a designer key to defining the art direction of Neon Genesis Evangelion during its development, and so his style in the manga is naturally very authentic – more than authentic, in fact, as it is Evangelion after all, and Sadamoto is a skilled artist. The unique design elements which made the Evangelion anime such a departure from its contemporaries is still in evidence in the cold macabre majesty of NERV’s cavernous interiors, and his ‘crinkled’ line is distinctive in being sharp-edged but still organic, making every image interesting. His characters are very expressive and have plenty of personality, and he fills out bodies with detail and cleverly curves his motion-lines to provide more dynamism in movement. However, he has already lent his style to End of Evangelion itself, and I am not altogether convinced that the manga is a necessary alternative.

The manga is not quite a slavish frame-by-frame replica of the anime, and Sadamoto has injected his own original perspective on events throughout Shinji’s story. Again, though, there’s a musty lack of freshenss. Compared to the outrageous contorted twists that the Rebuild films have spun off into – it’s not the place to discuss them here, but I can say that Shinji ain’t in Kansas no more – Sadamoto’s little nudging bumps away from the storyline are rather tame.

They don’t necessary need to be radical, though. Sadamoto has a good sense of writing a complementary story, and his alterations have in multiple places enhanced and expanded Evangelion, filling out characters that the anime only had time to generally sketch (Kaworu in particular benefited from this extended focus), and providing new perspectives – a personal favourite is in Volume seven (back in 2004!) when Kaji took Shinji to task for his refusal to fight Bardiel; and the thrilling reveal when Gendo summoned the implanted Adam’s AT Field to dismiss a barrage of bullets with a literal wave of his hand couldn’t help but elicit a gasp.

My objection is not with the principle but the practice. Here in this latest volume, it’s just that he’s made some bad calls, and the changes he’s introduced don’t really work

The biggest departure in this volume involves Asuka's rescue – where previously Unit-02 was eaten alive by the ravenous MP-series, here Shinji descends in the nick of time to fend them off. I don't begrude Shinji the cathartic effect of finally being able to show a lick of heroism after years of being ridiculed as a mildewed weed (although I prefer the tragedy of Asuka’s original fate), but the manga isn’t the best setting to show it off. What made Asuka’s battle against the MP-Series in End of Evangelion so remarkable wasn’t just her ballsy leap into the fray, but its sense of weight and scale. Bodies ploughed through buildings and feet scrabbling for purchase gouged away entire strata of topsoil; each swing of the oversized sword-plates lurched with heavy sledgehammer inertia, and even the Evas themselves tottered at their ungainly lunks; Asuka hurled herself around her cockpit as though she could only depress a button by body-slamming it. It rammed home just how massive – and mighty – these creations were, and the power clenched within them: they were no longer mecha, they were Titans. That sense of terrible awe is completely absent from the manga. The encompassing widescreen scope has now been boxed in by panel gutters and the camera is constricted on bodies, cropping out the grand arena of the Geofront – the fight now degenerates into a jumbled flailing confused ruck. Even for someone who is new to Evangelion and has no alternative to compare it to it has no clear progression and is a dissatisfying fight.

Ritsuko’s confrontation with Gendo in Terminal Dogma is one change that does work well. Sadamoto has written what he thinks Gendo’s muted-out last words to her were (nothing radical - it’s probably what we all expected), but whereas in End of Evangelion Ritsuko’s body dissolved into the LCL lake, here things pan out a little differently. Gendo's bewilderment at the events which follow smartly underlines just how things have so quickly spiralled out of his meticulous self-assured control, emphasising just how slender his grasp was and asking whether it was confidence, arrogance or delusion which carried him through so far.

The remainder of the manga follows the known history much more closely, replicating many of the images that we have already seen in End of Evangelion from the MP-series crucifying Unit-01 to Rei’s merging with Lilith and her giant form rising up over Earth. While the still images of the manga may give you more opportunity to reflect on the scenes, personally I preferred the looming sense that came from the moving pictures – for instance, Rei’s ghostly finger passing through Maya here lacks its discomfiting eerie unreal smoothness of the anime, which dampens the impact of her panic-attack afterwards. The volume concludes with another original segment with Shinji reflecting on some incidences in his youth when he pushed people away; it’s an opportunity to consider the conditions that lead towards Instrumentality, but then suffers by being placed right at the end of the volume, where it only introduces the back matter and not Third Impact as it should have done.

I wouldn’t call the Neon Genesis Evangelion an essential purchase, but it is nonetheless an interesting one. For many readers, buying it may seem almost a duty, lining along the path to see the long saga to its (almost...) final close. it Even though it is so late in the series there is still something for newcomers to the Evangelion franchise here – End of Evangelion has been out of print for a long time and cannot always be found, so the manga at least provides an opportunity to catch some of the grand finale of one of the most influential anime that there has been. Sadamoto is a strong artist and he shows himself well here, although if you’re buying the manga solely for his artwork you may want to consider putting the money instead towards his recently re-released Der Mond artbook, which also includes Evangelion production sketches and some of his non-Evangelion art too for variety.  Altogether Neon Genesis Evangelion's thirteenth volume is more an artefact than an artwork - valued more for its history than its content - but it will still improve your shelf.

7
Like meeting a distant relative after a long absence - pleasant, if a bit baffling.