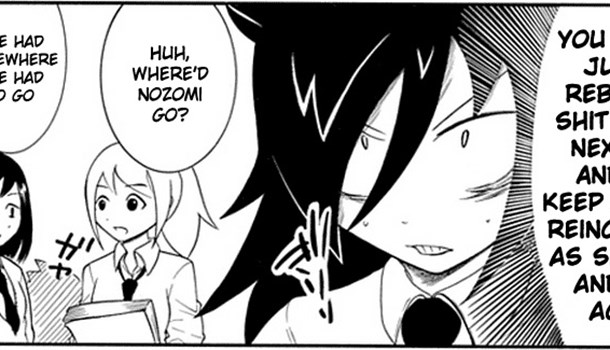 Tomoko Kuroki is very popular and experienced in dating – in dating simulator games, that is. In reality, Tomoko isn't popular at all. She is a shut-in, socially awkward geeky girl who spends most of her time surfing the World Wide Web, watching anime and courting the many eligible bachelors in otome games. Now that she is about to start high school, the fifteen-year-old otaku is adamant on changing into the popular, social butterfly she feels she is meant to be. After all, all the hours spent indulging in dating simulators surely are a valid and solid base for dating in real life, right?

Tomoko quickly comes to realise she has no social skills whatsoever, even suffering from crippling social anxiety. After months of high school, she hasn’t even so much as talked to any of her classmates, and has to rely on her brother to have at least some sort of social interaction in her life.

The heroine isn’t a heroine at all – instead, she is far from perfect. If anything, Tomoko is rather unlikable at first, harshly judging her classmates who do have a (social) life. Despite her blatant own shortcomings, she is convinced she should be popular, therefore it can only be the fault of her classmates that she isn’t. Shifting from being too optimistic about herself to downright depressed, the rather neurotic Tomoko often zones out in her own thoughts and seems slightly out of touch with reality, even being a bit perverted at times.

Art-wise, WataMote (to use its shortened Japanese title) is a pleasure to read. The cover may give the impression of overuse of chibi-characters, but overall it keeps a more realistic style.

Tomoko is not one of the nerdy-but-secretly-pretty otaku girls – she is depicted with bags under her eyes and messy hair. Unlike her one and only friend from middle school, Tomoko isn’t an ugly duckling ready to turn into a beautiful swan (in fact, any attempts to look ‘kawaii’ are met with disaster.) The fact that there is no easy escape from her otaku-status adds to the true-to-life feel of the story.

Socially awkward, nerdy teenage high school years may be recognisable to some – perhaps even painfully so. Every chapter of the manga focuses on this girl desperately trying to become popular, failing miserably every time. Going from that description, you may expect a downright depressing story. However, the manga manages to steer away from heavy drama, providing comedic relief above all else. Tomoko often gets stuck in funny and equally cringe-worthy situations, yet the story doesn't go entirely over the top, retaining the realistic feeling.

In this first volume, Tomoko doesn’t redeem herself whatsoever – she is still an unsocial shut-in, harshly judgmental, and stays convinced none of this is her fault. This lack of character development and complete absence of romance may not sound like your typical slice-of-life manga, which makes the story only more interesting. Despite the quite heavy subject of an outcast trying to fit in, the manga greatly succeeds to remain lighthearted and enjoyable. Regardless of her imperfections and often playing the victim, you will find yourself liking Tomoko, even rooting for the anti-heroine and hoping that may she finally find friends and romance.

The anime adaptation unfortunately only saw one season, with no plans for further seasons. The manga is still ongoing, and with this first volume effectively drags readers in the world of otaku Tomoko, questioning when or if she will ever accomplish her quest for popularity.

9
Tomoko isn't popular and that, it seems, is all your fault.

Clover hasn't written a profile yet. That's ruddy mysterious...
LATEST REVIEWS
I Have a Secret