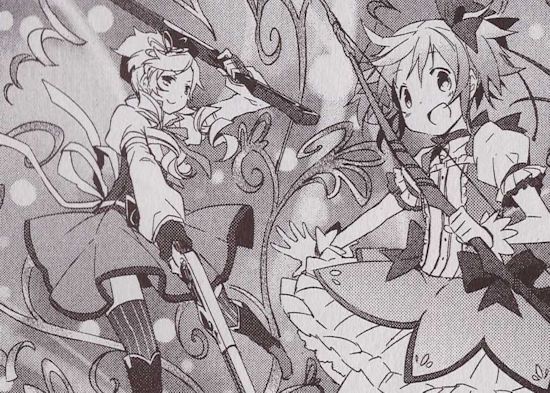 After two volumes of closely following the anime upon which it is based, we reach the end game of Puella Magi Madoka Magica via this third English translated volume of the series from Yen Press.

If the scenes which closed out the second volume weren't harrowing enough, the impacts of Sayaka's decision-making also reverberate through the early part of this final instalment, swallowing up all and sundry into its rather particular mire as Homura Akemi continues to be the only one with any real knowledge as to what's going on and why.  The reason why Homura is more "on the ball" than her fellow magical girls is then revealed and peeled away to take up a major portion of this volume, in a move which also marks a rare occasion where this manga adaptation sports some subtle differences to its source material.  It's nothing major, and the basic layout and progression of the series is the same, but these small tonal shifts and additions do serve their purpose of adding something extra to the story of a whole and ensures that this final volume of the manga offers something a little more than simply another way of enjoying the story.

Finally, it's onwards to Walpurgisnacht, and an opportunity for artist Hanokage to really show what he can do - it would be unreasonable to ask that this manga even come close to delivering the scope of this climatic battle as it occurs in the original anime, but this take on the story does a simply tremendous job of making a decent fist of it to ensure that the whole thing is darkly engaging and absolutely striking in its own way.

Although it would be easy to dismiss Puella Magi Madoka Magica's manga adaptation as its "lesser" form (and it certainly can't quite reach the heights of the source material simply due to the disadvantages inherent in its format), to do so out of hand would actually be rather unfair - this is a highly accomplished adaptation that might not bring anything much to the table for existing fans, but it still works perfect well as a mechanism to deliver its fascinating and cleverly-written, well-paced tale while avoiding a lot of the potential visual pitfalls that this outing could so easily have fallen into.

In other words, it's as good as you could hope it might be, and if manga is your medium of choice then this is a great way of seeing what all of the fuss surrounding Madoka Magica is about, and Yen Press' translation and presentation more than does it justice to boot.  It also serves as a warm-up for the two spin-off manga series, Oriko Magica and Kazumi Magica, which Yen Press will begin releasing in English this year, giving fans plenty of material within this particular world to get their teeth into over the coming year.

9
The final instalment of Madoka Magica in manga form is another excellent adaptation of the source material, that even manages to strike out on its own in some subtle ways.
COMMENT AND DISCUSS
blog comments powered by Disqus