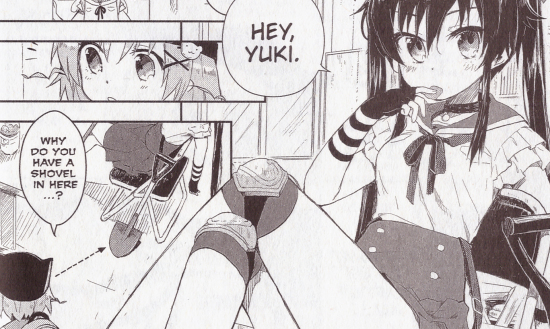 Given anime and manga's obsession with high school and the seemingly boundless joys and wonders that are contained within them, it's perhaps surprising that there's something rather novel around School-Live's initial premise - an after-school club where its members literally reside within their cutting-edge place of learning twenty-four hours a day, seven days a week. Beyond this single fact, the goals of the School Living Club seem pretty nebulous - they spent their days eating, sleeping, learning and finding other things to do with their time under the watchful eye of their friendly supervisor.

If you've somehow managed to miss all of the hubbub and spoilers around this series over the course of the past six months and its anime adaptation's airing - congratulations, and stop reading this review now!

Are they gone yet? Okay, I think they both left, although to be honest School-Live's first big reveal isn't exactly deeply concealed - a look at the cover art will give you some sizeable clues as to what's going on here, and even Yen Press' own synopsis for the series gives the game away about the heart of the series, confirming that yes, the girls who make up the School Living Club are the sole survivors within their establishment of a zombie apocalypse.

The reason for this obfuscation of the truth isn't simply for the reader's pleasure however - the existence of the School Living Club has primarily been brought about as a layer of protection around one of its members, Yuki Takeya. While the other club members are living with the harsh realities of a life where they're trapped in the school and forced to fend for themselves (and defend themselves when necessary), Yuki is trapped in a different sense - caught in a dream world brought to life by her own mind as a defence mechanism against the traumas she's witnessed, insisting that she's still enjoying a happy, fulfilling school life with her friends and conveniently erasing the uncomfortable truths of the wrecked school building within which she resides.

If you're familiar with the aforementioned anime adaptation and how that teased and then lifted the lid on its first big reveal, then it's worth noting that the original source material handles it very differently, using a single two-page spread which suddenly breaks us out of Yuki's view of the world and presents us with the reality of her surroundings. It might not have quite the impact of its animated equivalent simply as a result of the medium, but it's still effective in its own right and packs a punch even when you know it's coming.

Once that little secret is out in the open, School-Live can really get down to business, mixing the other girls attempts to keep Yuki entertained, happy and above all safe while also trying to keep a handle on the difficulties of keeping everything they need to survive running. These two sides to the story make for strange bedfellows - one minute we're engaging in cheerful banter, the next we're bashing zombies over the head with a shovel - but they sit surprisingly well together to make a coherent and enjoyable whole, mixing the happy memories of a school life well lived with notable tinges of sadness that this is an illusion within a world where joy is now in decidedly short supply.

This opening volume's artistic treatment is a big part of ensuring that this series works in its varied outlook - its character designs are all appealing, and the shifting emotions and surroundings of the story based on the experiences we witness are all expertly delivered with more than enough detail to make those shifts from Yuki's cosy fantasy world to the shattered reality of her circumstances all the more jarring and impactful. If we were to have one criticism, it's that the series starts to lean needlessly upon flashes of fan service as you move deeper into the volume - it almost feels like a lack of faith in the material at the volume's disposal, as panels are framed at lower and lower angles until we're literally just staring up girls skirts while they sit at a desk, or are greeted with an opening chapter of Yuki in her underwear for no particular reason. There are ways and means of inserted this kind of material into a story of this nature without feeling like sleazy leering, but School-Live's opening volume doesn't seem to have gotten to grips with them yet.

That gripe aside though, this is a pretty strong and enjoyable opening to School-Live - it doesn't have quite the panache of its anime adaptation at this stage, but it has the characters, story and concept to back things up, and with more twists foreshadowed in this volume those who have remained spoiler-free can still enjoy picking over other potentially incongruous elements of its narrative that are clear and present here. Indeed, even knowing what's coming doesn't necessarily spoil the enjoyment of watching how things pan out and keeping your eyes peeled for the hints of future directions, which is a sure sign of a series worth reading.

With a typically satisfying presentation and translation from Yen Press, and an enjoyable and smartly told story that holds the ultimate promise of taking us beyond where the anime left off, School-Live is certainly worthy of your consideration - even if you feel like you're done with zombies in fiction, there are enough fresh ideas and layers of presentation here to make you rethink that policy, and you'll be well rewarded in doing so.

7
It might not have quite the impact of its anime adaptation, but this is a strong start to a series that manages to bring something fresh to an otherwise tired genre.
COMMENT AND DISCUSS
blog comments powered by Disqus