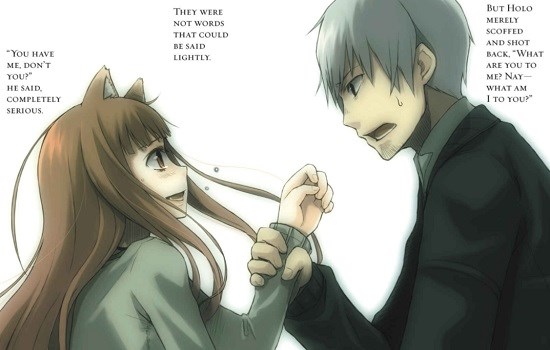 Although Isuna Hasekura's series of Spice and Wolf light novels comes to an end in Japan next February with its sixteenth and final volume, we still have a long way to go here in the English-speaking world as we reach the third instalment of this pseudo-medieval tale of travelling merchant Kraft Lawrence and his decidedly unique travelling companion who just happens to be a wolf deity, Holo.

By the start of this third novel (which meshes in with the first half of the anime's second season, incidentally) there's little need to introduce the franchise's two main characters or their circumstances beyond a brief reminder, which instead allows us to delve straight back in to the ever-fascinating dynamic between Holo and Lawrence as they continue on their journey and edge ever closer towards the former's homeland of Yoitsu, although its exact location is still fuzzy at best.

It's this continuing search for Holo's home, and more importantly Lawrence's knowledge as to its possible fate, that drives much of the drama of this novel as the pair explores the town of Kumerson at the time of a large festival being held there.  Indeed, Kumerson proves to be perhaps the most vibrant backdrop for this series yet, with the on-going festival mimicking the tone of the book as it follows Lawrence around while the town itself offers plenty of variety in the characters and opportunities it offers.

Speaking of characters, this book wastes no time in introducing us to a young and successful fish merchant named Fermi Amati; it is his instant infatuation with Holo which also plays a part in bringing the book to a head, both dramatically and in terms of the series ever-present reliance on economics and trading to add some frisson to proceedings.  Come the climax of the novel we come as close to a "battle" as its mercantile setting can allow us, proving the worth of using economics as a dramatic construct far more compellingly than either of the first two books.

In fact, this third Spice and Wolf novel barely puts a foot wrong from beginning to end, finding plenty of emotion and drama in the relationship between its two main characters throughout without ever losing the charm that comes from watching them verbally sparring in certain stages of the book.  That dramatic tension is also expertly realised via the book's writing style, which fosters a certain amount of passion when required and gains a lot from following in Lawrence's footsteps as his dilemmas ramp up, allowing us to enjoy and thrill at all of the twists and turns until their final, beautifully paced pay-off.

Although this is the most intense novel of the bunch so far, admittedly it isn't for everyone - if you haven't fallen for the dynamic duo around which these books are framed by this juncture then chances are you never will.  For those who are hooked by the lives and adventures of this simple merchant and his far from simple companion however, this is the best Spice and Wolf has offered up yet, boding well for even greater things from this light novel series in 2011.

8
The twists, turns, emotion and drama of this novel makes it the best instalment of the Spice and Wolf saga yet.

Written by on 28 Dec 2010
LATEST REVIEWS
Higehiro: After Being Rejected, I Shaved and Took in a High School Runaway (Vol. 1)