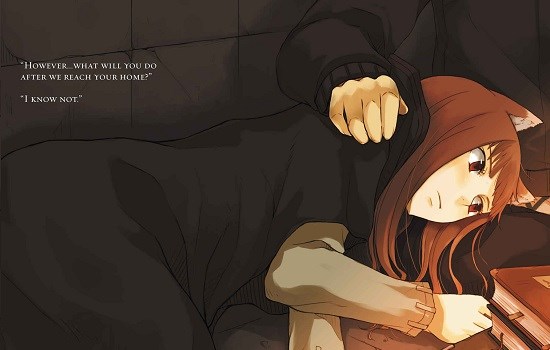 It may all be over in Japan, with its final volume now on store shelves, but here in the west we still have a long, long way to go in terms of following the journey of merchant Kraft Lawrence and his decidedly unique companion Holo.  Given that the third, previous volume of this light novel series offered us perhaps the most tense and compelling scenario of the franchise so far, it's fair to say that volume four has quite a lot to live up to.

Following the friction between its two major characters as it pertained to both their relationship to one another and Holo's search for her home in the last book, things have returned to a far more settled normality (or at least as close as you can get to one when you're travelling with an ancient wolf deity) for this latest novel - a little under a week after the events of volume three, Lawrence and Holo are on the road again, now seemingly armed with some information which could help in the search for the latter's home as they journey north.

More specifically, our two travellers have been informed of the existence of an abbey in a small village - an abbey run by a man of the cloth named Father Franz who also happened to be a collector of pagan tales and legends; just the person to speak to when it comes to finding information as to the whereabouts of Holo's home town Yoitsu, and indeed its fate following the rumours that it was attacked and destroyed by some kind of bear deity.

With no mercantile pressures and only some information at stake, it seems as though Lawrence and Holo's task on this occasion is an easy one, but of course this proves to be anything but as the villagers deny knowledge of the existence of the abbey while it soon becomes clear that Father Franz himself has passed away.  The longer they stay, so the stranger place Tereo seems to be for an outsider looking in, with Lawrence in particular unable to fathom how the villagers can afford to exist as they live a seemingly sedentary lifestyle day to day.  As the truth about the arrangement which allows this scenario comes to light, so our travelling duo find themselves in the centre of a situation which threatens both their own progress and the entire village's well-being - with few individuals that they can call friends in the area, and as Holo finally makes what could be a breakthrough discovery about her home, it's clear that some difficult decisions need to be made to escape or otherwise rectify the situation.

As that synopsis might suggest, this is very much a book of two halves.  The first portion of the novel enjoys the usual chatter and teasing between Holo and Lawrence that we've become accustomed to (and indeed never get tired of), but beyond that it takes quite a long time for anything of sufficient interest to happen to truly catch the reader's eye as it slowly, painstakingly depicts the small, sleepy village around which the book revolves.  Whether quite this much build-up is required is arguable as it threatens to cool the reader's interest in goings-on, but thankfully just as things seem to be reaching an intractable mire of mediocrity, so Isuna Hasekura manages to turn everything on its head with a swift, powerful twist that nonetheless remains utterly believable.

From this point onwards, the pace picks up considerably while also making the most of both Lawrence and Holo's unique attributes, in a surprisingly well-realised blend of everything that makes this franchise what it is - smart story-telling with some decidedly clever twists and turns offset by the supernatural abilities and wisdom of Holo, topped off by frequent bursts of sparkling dialogue between the main characters which never feel to be a joy to read.

Once again, this volume of Spice and Wolf is given a top-notch treatment by Yen Press, with a "mainstream" slip cover sitting atop the original novel's illustration while all of the illustrations from within the novel itself are intact and left in their original form.  In terms of the content of the novel itself, the work as a whole is impeccably translated and, quite frankly, a joy to read.

Ultimately then, this isn't perhaps Spice and Wolf at its best on account of its ponderous opening chapters, but there's still more than enough for existing fans of the series to enjoy without feeling let down by this particular volume as it continues to build the story or Holo's journey home in particular while also keeping at least one eye firmly planted upon her relationship with Lawrence as it grows and develops.  It's really this relationship which underpins what Spice and Wolf is all about and as long as this remains strong then the series will surely never falter; even so, you have to be at least a little impressed by a novelist who can take economics and bread-making and somehow turn them into a compelling read.

7
The initial build-up is decidedly slow, but its ultimate pay-off is worth the wait. Not Spice and Wolf at its absolute best, but still an enjoyable read.