Star Trek: The Next Generation - The Manga

Star Trek: The Next Generation - The Manga

Star Trekisn’t exactly what I would imagine needs a manga treatment. After seven seasons of the TV series and a handful of movies, you would think the fan base has had enough of the TNG cast. Hell, after the disaster that was Enterprise and a film that I can only describe as Dawson’s Creek in space on the way, you’d think morale on the good ship U.S.S. Enterprisewould be at an all time low. So what better way to try and raise morale than have our favourite cast appear in something new. It’s a shame that this book should be shoved into the nearest torpedo tube and fired at a Romulan ship. (Racist ^^ - Ed)

So what we have is a collection of four original stories dotted around the different timelines from the TNG TV series. If Star Trek has anything going for it, its a rich cadre of source material to make good use of. We have encounters with Romulans and the Borg, and even a good old fashioned mystery. Oh and that annoying arse Wesley gets his own story as well. Damn it!

Star Trek is a series that really, really, REALLYdoesn’t need the manga treatment. Lets not forget that the TNG universe is the most sterile, boring and feel-good environment imaginable. But beyond that, watching the series you’ll notice that no one really gets overexcited, does things for fun or is just there to have a good time. No one is even overly expressive aside from the telepath having one of her “it hurts me 'ead” moments. So using an art-style that is all about emotion and execrated movements in a series that features none is like making a child create the Mona Lisa out of crayons and pasta. It may seem cute, but if you’re expecting a masterpiece afterwards then you're in for disappointment.

The artwork of the book varies in quality all the way through and while it isn’t diabolical, it doesn’t ever rise above the average. You can recognise your favourite characters (though it’s impossible to miss Riker and Worf) and fans will see their favourite sets recreated in pencil. Happy times.

So the artwork is average, what about the stories? I have to make special mention of the first story - The cover proudly announces; “featuring an all-new story by veteran Star Trek scribe David Gerrold, writer of the classic episode “The Trouble with Tribbles”!” Sadly this particular comeback is nothing short of the worst since Jacko at the New Music Awards. Apart from my personal hatred for Wesley Crusher, it’s a story about how he learns to be part of a team by changing into versions of the crew. Going from looking like La Forge (the blind dude) to a Klingon, then a woman (with a surprisingly small skirt and some large *ahem* proportions). But it’s all fine, because he learns his lesson and finds out it was all on the holodeck and everyone has a good old laugh. Ho ho ho. Now all we need is Captain Planet to tell us not to litter after spending our money at the nearest corporate vendor and G.I. Joe to tell us all that winners don’t use drugs. It’s all so very Saturday morning cartoon and someone really ought to tell the writers that Sci Fi has become both more complex and less condescending. And then slap them.

The other stories, while not as bad as the above, never rise above the mediocre. Something about the telepathic communicating aliens, Romulans being pissy about something as always and when all else fails we’ll have a story about the Borg. I mean, it helped Voyager towards the end after all. If you’re not bored by the second story and completely lose interest in what is going on, then you are a braver person than me and I salute you. I’ll get out the appropriate uniform and point you in the direction of the nearest spaceship. Have fun.

I’m willing to bet that even the most hardened Trekkie out there is going to scoff at this. It really isn’t worth most people’s time and while it may peak the interest of someone in passing and seeing a cartoon representation of everyone’s favourite English actor, just keep on walking. I may be accused of being a manga snob and only wanting my manga to come from Japan. But if this is the kind of thing that will come out regarding western made manga and people want more of this, then I’ll be warping over to Japan. Least Battlestar Galactica had hotties in it. 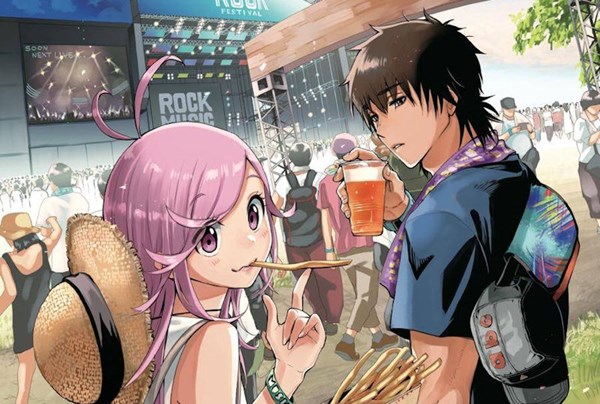