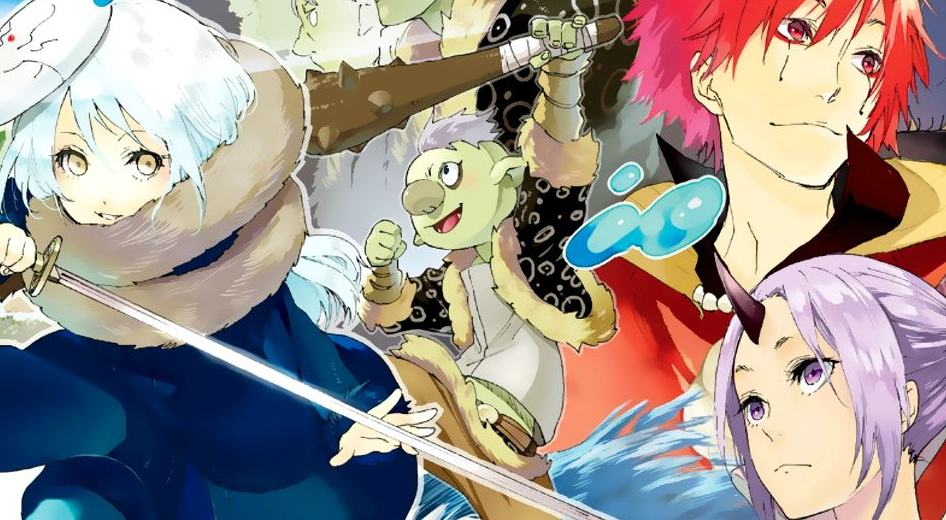 That time I got reincarnated as a Slime

When a normal, everyday salaryman named Satoru Mikami is killed by a mugger, he finds himself awake in a dark place, completely unable to see his surroundings or feel his body. As it turns out, Satoru has awoken in a dungeon as the lowliest of RPG creatures, a slime.

Making the most of his newfound abilities, he embraces his new lease of life, first understanding how to "see" and then, once encountering an imprisoned dragon takes on the name Rimuru Tempest - and from here, the world is his to conquer.

As the second book I've received from Vertical, I find my initial impressions have been wrong twice in a row. After the pleasant surprise of She and Her Cat, what I assumed would be a standard fantasy manga along the lines of Is it wrong to pick up girls in a Dungeon or Sword Art Online (or any of 100 other similar titles), the book takes an unusual route by nerfing our hero from the off and making his journey one of admirable self-determination and open-mindedness.

If the intro to book one is to be believed, Rimuru is destined to take full control of his slime abilities, and even generate a human body, surrounded by a cadre of interesting looking characters. But for now, this is the gutsy story of a man-turned slime out to discover a bold new world literally armed with nothing more than his wits. (well, maybe a few monster skills...)

The book certainly has a unique take on RPG tropes. In one chapter, Rimuru meets some goblins and, quite by accident, changes the entire tribe for the better through the unintended consequence of a kind act. In setting up the rules for this odd new world through Rimuru's travels, Fuse have created a great way to involve the reader. The solutions to the problems encountered by our hero are logical and show growth as our hero learns about his own powers and limitations.

So, technical details then - the script is deftly handled, with each major character having a distinct voice (aided at times by the representation of the speech on the page by the artist). Speaking of, I love the artwork in this book. Rimuru's only expression, for now at least, is in his body shape and eyes. The artist is surprisingly adept at bringing out a range of emotions from this limited palette, but where the book calls for more detail, Taiki Kawakami certainly delivers. His monsters are suitably threatening, and his maidens are certainly comely in the most tasteful fashion.

The script's humour, coupled with the expressive style and exciting story are good enough to be a strong recommendation on their own, but wait - there's more!

At the rear of the book is a 14 page short story which recounts events from Veldora the Dragon's point of view. The mighty dragon is absorbed by our slime-hero early on in the story, and as such he has a ringside seat for all that happens. This is a great addition to an already fine book and adds a lot of value to the volume overall.

In the end, it's hard not to recommend the book to fans of the genre. Even newcomers to fantasy can learn as they go, such is the nature of the heroes journey within. I find myself very fond of a creature I had previously killed time and again in RPG's like Secret of Mana. In Future I shall be more respectful of the lowly slime, because you never know who or what you may be fighting!

9
Wit, charm and self-determination win the day for an unlikely new hero.
COMMENT AND DISCUSS
blog comments powered by Disqus