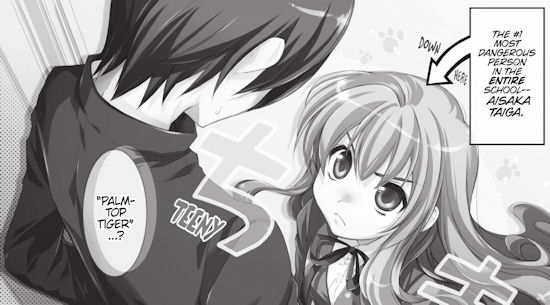 Before I start this review, here's something of a disclaimer - I'm a huge fan of Toradora in its anime format, and genuinely consider it to be one of the greatest romantic comedy anime series ever to grace our screens.  Therefore, my expectations were high for this manga adaptation of Yuyuko Takemiya's series of light novels which actually pre-dates the airing of the anime version by around a year, and to be honest I summarily prepared myself to be disappointed as a result of those expectations.

Certainly, a mere glance at the cover of this opening English volume of the Toradora manga set my heart plummeting into my boots, courtesy of perhaps the most horrible and scrappy piece of cover art ever conceived.  Reminding myself that you don't judge a book by its cover however, my spirits were soon raised again as the first few pages showed that Zekkyo's illustrations within were anything but scrappy for the most part - in fact, at times this opening volume does a fantastic job of rendering its characters to the point where they're almost too cute and adorable.  The art style does vary from such beautifully detailed frames through to quick, basic drawings to illustrate some of the more slapstick moments of comedy (with varying degrees of success it has to be said), but overall the quality of the artwork is good - cue a sigh of relief from this reviewer.

This then allowed me to concentrate on the wonderful medley of leading characters we're introduced to in this opening volume, with one particular pair at its forefront.  This dynamic duo consists of Ryuuji Takasu (although Seven Seas Entertainment have insisted on using Japanese name order here in what is otherwise an arguably over-Americanised translation) and Taiga Aisaka, the dragon and tiger of the franchise's title respectively.  Although these two may outwardly seem to be personifications of the animals their names mimic, in truth they are anything but - Ryuuji is a worrier and a neat freak and far from the delinquent his evil-looking eyes suggest, while Taiga is less the "palmtop tiger" and more or a helpless kitten when it comes to doing anything other than looking angry.

After an incident on the first day of the school year that sees Ryuuji swear he'll avoid Taiga like the plague in future, circumstances soon contrive to thrust them back together via a love letter stuffed into the wrong bag and Aisaka's subsequent attempt to retrieve it.  Before we know it, Ryuuji and Taiga have become uncomfortable partners in crime, with the former promising he'll help Taiga get closer to his best friend Kitamura while for her part Taiga promises to introduce Ryuuji to her buddy, the ever-cheerful Minori Kushieda.

The scene is then set for an opening volume of classic romantic comedy fare, with contrived attempts to bring Taiga and Kitamura closer together backfiring in increasingly hilarious ways while unwittingly bringing our two protagonists closer together by the page even if they haven't realised it yet themselves, such is their obsession with the apples of their respective eyes.

Although this premise is as old as the hills in places, it does also succeed in its comedy more often than not to the point of being laugh out loud in places.  More importantly though, even if you're new to Toradora it won't take long for its major characters to capture your heart - Ryuuji is such a nice guy (and far removed from the usual wishy-washy manga protagonist despite his faults) you can't help but root for him, while Taiga is a classic tsundere who works perfectly as Ryuuji's foil with a mixture of biting remarks and a propensity to sneeze and fall over at the slightest provocation.  Even the supporting characters have enough going for them to instantly win you over, whether it's the infectiously cheerful Minori's pudding obsession (and boy does this girl have a weird idea of how you should make pudding) or Kitamura's nerdy yet affable outlook.

Come the end of this volume everything really is about as predictable as you'd expect, so there won't be any surprises in store for you as you turn the pages of Toradora's opening - this is perhaps where my bias comes in to my advantage, as I know that this series is on track to become much, much, much better.  Even putting that to one side though, this is a great introduction to Toradora's world and characters which is not only sweet but incredibly funny when it wants to be - throw in some nice artwork and my assurance to you that better is to come, and this is a great start to a series that should be picked up by any fan of romantic comedy manga.

8
This opening volume only scratches the surface of the series like a palmtop tiger, but even without its claws it's still an enjoyable and downright funny read.
COMMENT AND DISCUSS
blog comments powered by Disqus