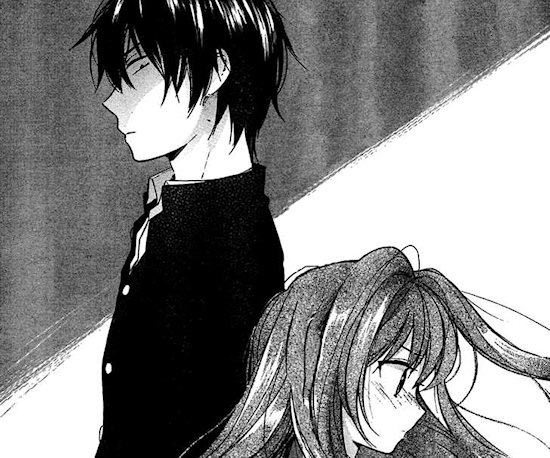 Despite its downright ugly cover art, the opening volume of Toradora proved that you really can't judge a book by its cover, providing an adaptation of its story's original light novels that was just as charming and downright funny as its much-loved anime adaptation (which is sadly unavailable in the UK at the time of writing).

Having used that opening volume to introduce us well and truly to its main quartet of characters, much of this second volume has the time and space required to throw a little more turmoil and confusion into its major relationships. These problems all stem from Ryuuji and Taiga's joint efforts to impress their crushes, which backfire spectacularly as the amount of time the pair spend together in the process convinces all and sundry that the two of them are dating.  While convincing the individuals in question that this isn't the case is relatively simple (and indeed entirely true), the whole incident causes a little soul searching from both of our characters as they try to get to grips with exactly what they mean to one another and why they enjoy spending time together so much.

Just as everything looks set to settle down and return to normal, so a cat is set amongst the pigeons as this volume comes to a close, courtesy of a friend of Kitamura's named Ami Kawashima; a girl who is something of a celebrity thanks to her status as a ditzy, friendly model.  But is that really her true nature?

While the first volume of this manga was really all about deriving comedy from its scenario, this second bundle of chapters has a more emotive, deeper tone to it as it gets under the skin of Ryuuji and Taiga's feelings and begins to steer things in a different direction as a result.  This makes for some scenes which are genuinely heart-warming or even slightly tear-jerking as they're played for maximum emotional impact and make full use of the organic dynamic between the lead characters in the series; the only criticism here is that things are occasionally delivered in a more blatant and thus heavy-handed manner than the anime adaptation of the series, but this is more a case of personal preference on my part than an outright failure in the story-telling on show here.

Even with this more central focus on matters of the heart, Toradora's comedy certainly isn't forgotten, with plenty of over-the-top reaction shots to add a layer of humour to proceedings and some great pieces of dialogue which have been largely well translated to keep their impact while still making sense in English.  You could argue that occasionally the series tries too hard to get a laugh via its artwork itself (devolving into scribbles on occasion as its characters shrivel in the face of calamity), but again your own feelings towards such visual gags may vary and the overall level of artwork is mostly very good indeed and suitably expressive when it needs to be.

It may be missing one or two of the subtleties of other interpretations of its story, but there's no denying that Toradora is as entertaining as it is compelling - assuming you've found yourself drawn towards its central characters in volume one, this second instalment of the series will grab you by the collar and won't let you go until you've turned the final page.  As an example of romantic comedy "done right" I'm not sure this can be beaten as it steers calmly from the hilarious to the moving without ever feeling clunky or forced.  Ignore that ugly cover artwork (and be prepared for a couple of relatively minor printing errors judging by our copy, sadly); there's a work of minor genius within its pages.

8
The series' existing humour is supplemented by a well-realised dose of emotion and romance in volume two, to make for an enjoyable read that you won't be able to put down easily.
COMMENT AND DISCUSS
blog comments powered by Disqus