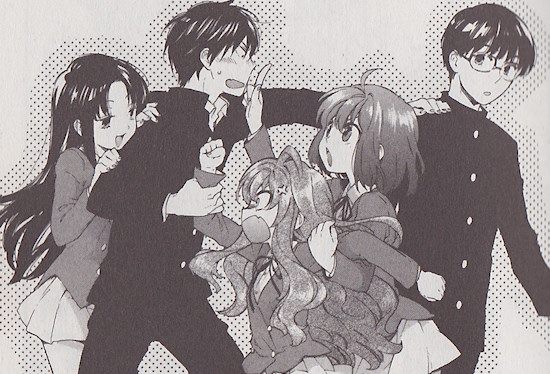 It might not be the story's original form (beginning as it did in a light novel format), but we've been hugely impressed by the first two volumes of Toradora and its razor-sharp blend of emotional drama and comedy, backed up by some occasionally great artwork.

Come the latter part of volume two, this manga's regular character roster had been bolstered by the introduction of Ami Kawashima, a beautiful teenage model and new transfer student to the other's school.  While her outward ditziness and friendly demeanour have merged with her good looks to leverage her popularity with all and sundry, Taiga and Ryuuji (thanks largely to Kitamura) know that behind this facade lurks... well, a bit of a bitch, to put it bluntly.

With this information to hand, much of this third volume is spent with Kawashima vaguely as its focus, as she butts heads with Taiga repeatedly before her own frailties begin to show in light of the truth about her recent school transfer.  This plot and character progression is performed with a lightness of touch that makes what we see feel organic without ever becoming over-bearing or too "heavy" - there's always some comic relief or a snappy one-liner around the corner to ensure that this volume remains entertaining even when it's digging into the darker depths of one of its characters.

In fact, you could probably argue that its comedy is where Toradora is actually at its strongest here - Taiga's clumsy slapstick is delivered with great visual comedy, and the artist clearly knows when and how to deploy otherwise simplistic character art to add an extra dimension to a particular joke or reaction to another character.  Admittedly, there are occasions where this use of simple, off-model characters threatens to become too frequent, but thankfully that particular line in the sand is never over-stepped.

Overall, this is another wonderful addition to the already compelling story-telling of Toradora thus far - closer in tone to the broadly amusing outlook of the first volume than the more emotional second, but still with lots of character and personality to drive the serious aspects of its tale.  There might be less to make this individual volume stand out against its predecessors, but from a broader perspective Toradora continues to be a manga series that anyone with a love of well-written romantic comedy can't afford to miss.