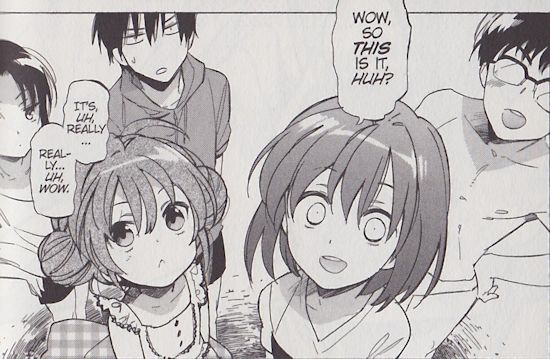 Having set up its premise and kicked things off in its previous volume, it's off to the beach (and perhaps more importantly Ami's rather fancy beach house) for this fifth volume of light novel series Toradora's manga adaptation.

Although sticking its main five characters in close proximity to one another sounds like the pre-cursor for all kinds of drama and emotional outpourings, this particular story arc is actually surprisingly sedate, focusing instead mainly on Ryuuji and Taiga's plan to scare the living daylights out of seemingly supernatural-phobic Minori Kushieda in the hope that Ryuuji gets to play her knight in shining armour as a result.

Of course, none of this goes quite to plan for a variety of reasons, providing us with a largely comedy-tinged caper as this group of friends goof around either together or behind one-another's backs - it's pretty fun for the most part, but nowhere near as strong as some of the great characterisation and story-telling that we've seen from previous volumes of the series.

Not that this fifth instalment is completely bereft of character-building - a small but subtle shift in the relationship between Ryuuji and Minori is beautifully depicted as they skirt around their feelings and thoughts via anecdotes, and Taiga's fondness for her unlikely buddy is also celebrated in a very organic and natural way throughout.

As a result, this is perhaps the least memorable volume of the series to date, but that doesn't stop it being an enjoyable addition in its own right - given how much care and attention has been afforded its characters up to this point, it would be churlish not to enjoy getting to spend some time watching them bounce off one another and have fun for the sake of demanding constant drama.  Thanks to the fact that its cast is so lovable, you can't help but be caught up in this volume no matter how relatively pedestrian its story might seem at times.

In keeping with previous volumes, the art-style of Toradora continues to shift from some quite frankly adorable and frequently great illustrations through to ultra-sketchy super-deformed characterisations in the name of comedy as required - it works better than perhaps it should, and once you're used to its foibles those shifts which originally seem a little jarring soon become second nature.  Backing up the whole thing is a good translation and presentation from Seven Seas Entertainment that doesn't get in the way of you enjoying what's going on in the slightest.

Normally, suggesting that a volume of manga is the series at its lowest ebb to date would be a bad sign, but such is Toradora's overall quality as a series that on this occasion being the worst volume yet simply means that its contents are good and hugely enjoyable instead of utterly great.

7
This is Toradora's weakest volume so far, but it's still wholly enjoyable and offers a fun chance to let its characters breathe without any human drama getting in the way.
COMMENT AND DISCUSS
blog comments powered by Disqus