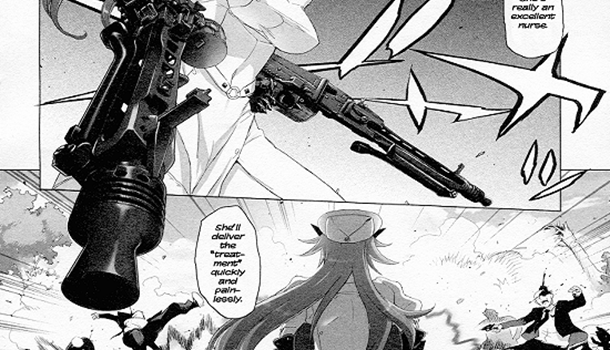 “Triage” describes a system of prioritising care in battlefield or other emergency situations when a medic is confronted by a large number of casualties. Attention is rationed according to the severity and immediacy of a subject’s injury – but also the likelihood of his survival given the resources available. This complicates the assignment of a triage grade; it is not a simple scale from paper-cut to compound fracture, but a difficult judgement balancing many factors, and the "Black Label" - lost, beyond hope, 'expectant' - is a burden of finality that not everyone can bear.

Masamune Mochizuki, the director of the Mochizuki General Hospital, was a formidable surgeon forced to make many difficult triage decisions in his career. As illness withers his own body he has come to understand that, through triage, it is not politicians or priests but physicians who are the ultimate arbiters of life and death. Doctors have a limitless power, for they are those with the means, method and motive to determine not only who can be saved, but who is worth saving. Mochizuki can no longer treat individual patients, but ruminating in his sickbed has broadened his perspective... looking to the wider community, and diagnosing a chronic infection of criminals, thugs and gangsters, a parasitic plague that drains the vitality out of honest innocents around them. With the edge of a sharp scalpel Mochizuki cut into patients... and now, in the basements of his own hospital, he directs the “Black Label Organisation”... a well-armed vigilante band that untangles the thorn-bush of medical ethics in the Gordian way, burning out the criminal infection to bloody effect.

Triage X follows the exploits of Arashi, the newest recruit to the Black Label Organisation. He is only a high-school student but has suffered much in a short life. Arashi was once good friends with Mochizuki’s son, but when both were mortally wounded in a terrorist bombing Mochizuki had to determine which one could be kept alive – and chose Arashi. Arashi has benefited from Mochizuki’s triage, the decision to save his life over others, and he endeavours to straighten out the impossible decision of a helpless tragedy, and do good by those who passed away beside him by taking the fight to the ganglands that flaccid police are too timid to confront, eliminating the kingpins that have been triaged, deemed hopeless, and given a Black Label.

Triage X is created by Shouji Sato, the artistic half of the fraternity that lashed the lusty blood ’n’ boobs zombie-action extravaganza Highschool of the Dead onto the page. With the body of his brother Daisuke’s writing slowly cooling on indefinite hiatus, though, Shouji has now gone it alone with his own original work. The apple does not fall far from the tree, and if you’re familiar with Highschool of the Dead’s fever of women and weaponry then Triage X will go down very easy.

Sato’s style, carried over from Highschool of the Dead very much unchanged, is a peculiar mix of the carefully considered and the completely crazy. He’s already (in)famous for his heaving bosoms, but there’s other things to focus on, too: Mikoto’s shapely thighs, Sayo’s long legs, the gently-rising hot-cross bun rosiness of Hinako’s clea— okay, I’ll stop now. Suffice to say, the nurses at Mochizuki’s hospital have an impeccable bedside manner, although the institution must suffer from one of the worst heart attack rates in the country.

Seriously though, however luscious the lascivious ladies may be (and there’s something for the girls, too, as Arashi’s taut, craggily muscular body provides a thick hunk of man-service), Sato’s art is also improved by an effective sense of design. The boobies aren’t puffed-up balloons but shaped to his style of tall, lanky bodies so they actually don’t look all that out of proportion. The camera angles may have a preponderance to looking down the girls’ blouses but they also spin wildly, sweeping you along to enhance action scenes with movement, propelling characters with power – when Arashi wallops an enemy there’s a wincing sense of cracking force behind the blow, and at the other end Oroshi (a popular idol singer who regularly brings the house down – quite literally, as she’s also the Black Label Organisation’s demolitions expert) is quite eerie as she floats around, rolling quietly on Heelie shoes and gazing behind a ghostly-white hockey mask.

Sato does demonstrate versatility at one point, where one scene abruptly shifts into realism as police argue about the criminals and vigilantes that are running rings around them. I don’t recognise anyone so I’m probably missing the essence of the joke, but the style change makes it obvious that Sato is lampooning television actors on Japanese cop dramas. Suggesting that they’re dullards who spend too long agonising over procedure is a considerably gentler approach than the Satos’ last incisive commentary on the entertainment industry – back in Highschool of the Dead they treated the zombification of a Korean TV star with a dose of .338 Lapua Magnum to the skull cavity!

Speaking of which, one aspect of Sato’s art is total pornography... the technology. Cars and weaponry are lovingly rendered in magnificently exact and unstinting detail, the joy of any boy who ever adored Meccano. Every gear and spring on Mikoto’s superbike quivers and revs... motorheads will shiver in delight! It’s a weighty counterpart to the fluff of the characters which helps the manga stay solid and secure.

However, the consistent style means that more than a few resemblances start to emerge between Triage X and Highschool of the Dead. Arashi is Komuro in some snappy leather duds, Mikoto is Rei with a bottle of hair dye, classmate Hinako is Alice moved up into the tenth grade, and the big-bad Masaki is Mr. Saido with his fringe slicked back. While you could say this makes the art samey and unimaginative, personally I get a bit of a kick out of seeing the ‘actors’ of Highschool of the Dead ‘recast’ in ‘new roles’ – if this is your first experience of Sato it won’t make any difference anyway, and if you are a already fan of his work it makes for a fun spotting game.

These similarities continue – although Shouji Sato is penning this manga independently of his brother Daisuke that doesn’t lead to any great change in the writing. Triage X is pretty straightforward. The villains are pantomime psychopaths – if there was any doubt about the whipping of prisoners, leering expressions, or goons from the ‘Hood, Sato makes sure you know it when they literally run over an elderly lady to show off a car’s engine power.  There’s little dwelling on how Mochizuki even equipped his vigilantes, or how high-schoolers can execute outrageous biker stunts – you’re expected to load it onto your suspension of disbelief, be a good reader and just enjoy the hi-fidelity firearms.  The characters are painted with broad strokes – Oroshi is the chirpy and spunky genki-gal, Sayo is the outwardly meek and weepy weed who’s actually a walking tank, and so on. A spanner is thrown into the works by Inspector Tatara, a crotchety hard-boiled detective who pursues the outlaws relentlessly but still cleaves to that fuddy-duddy concept of due process which gets him under the feet of the Black Label Organisation. It mixes things up, but his role is pretty much obligatory in all tales of vigilantism.

Arashi is really the only one who sees development in this volume. He a stoic sort – he and cover-girl Mikoto have a dark and bleak conversation about death, duty and loyalty... the fact that they’re both stark naked in the shower doesn’t seem to overly concern him. He’s not moronically oblivious, nor is he timidly flinching, but rather he has a zen-like long gaze that phases through the unnecessary things.

While the heroes and heroines are on their missions there are reminders that they’re paramilitary paramedics. The strike-teams of the Black Label Organisation are called “ampoules”, when they’re ready to fight they’re “on call”. Killing a gangster is “excising a tumour” and any perp who scurries away is a “metastasising cancer”. It’s something that’s really just a cosmetic gloss on the manga’s theme, although if you’re in a philosophical mood you could infer that it’s only through these euphemisms that they can sanitise the violence and take analgesics to salve their consciences. There is a side-effect of this in the opening chapter, when Arashi confronts one of the Black-Labelled villains; he offers the man his own pistol, inviting him to be rediagnosed by taking the ‘honorable way out’ with a form of seppuku as opposed to being part of the disease killed by Arashi. Happily for an action manga, though, the baddie only sneers and tries to turn the gun on Arashi, and so by his own actions he is definitively condemned as an evil blight, releasing the reader from awkward guilt and letting us cheer on the Black Label Organisation’s hits as extraordinary justice.  It might seem simplistic but it’s actually pretty smartly efficient storytelling, letting us dive straight into the exciting action of Arashi and Mikoto’s attack without having to dance around for several pages of the baddie being nasty so we can be sure he’s a baddie, as well as leaving a hook for Arashi’s back story when he reveals what influenced him to set up that test at a later point in the volume. Altogether, the writing is not inspired but is efficient at the business of setting up the field and laying out the players.

Yen Press has assembled a decent volume here - the cover design with its splattered paint again resembles and is aimed towards fans of Highschool of the Dead, and the manga treats us with some opening colour plates to whet our appetite. Christine Dashiell’s translation is competent throughout; I wonder if a few scenes could have been interpreted more colloquially, but that’s a question of taste. I do have one criticism - if peppering medical jargon into the dialogue adds flavour then the mafia bosses, who are called the clumsy (and homeopathic!) "seats of disease", should have been referred to by the more technical term of "locus" instead. That's a relative niggle though, and it is a readable script.

I’ll conclude this report by saying that Triage X is a sugary confection, a placebo – but the placebo effect can actually be very powerful. It won’t perform any great act of spiritual healing when you read, but it relieves the symptoms of boredom and the lively art means that you can go back and re-read several times without overdosing. Triage X is a confident actioner and an able palliative for the day’s stresses.