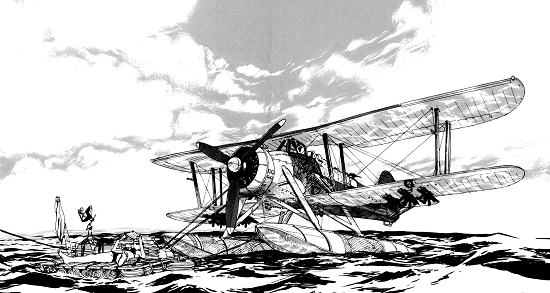 It's easy to forget when hundreds of anime and thousands of manga are set in Tokyo suburbs and metropolitan towers (be they modern high-school rom-coms or cyberpunk Nineties OVAs) but Japan is a large place that encompasses a wide variety of terrain from snowcapped peaks worthy of the Alps to the balmy aquamarine jewels of Pacific paradises, the glimmering corona around the Rising Sun. Even though they cost no more to draw - there's no location budget for anime, where you can make a coastline as easily as the side of a building with but a single pen-stroke - these settings are curiously rare even though you'd imagine it to be one of the country's most treasured environmental assets. Even Okinawa doesn't get a look-in unless the coin-toss for the School Trip Episode lands on the other side to Kyoto. Write what you know - which I suppose for most animators is the tram-ride between their bedsit and the office block. Kenji Tsuruta's Wandering Island then immediately leaped out at me from the shelf for breaking free from the rat-race and positively revelling in how far it can be flung. It's a strong pitch, but does it hit its target or just get lost in the water?

Mikura is an independent young woman who lives on Japan's far-flung Pacific islands, working as a pilot for her grandfather's air-courier service supporting these small, isolated communities. Refreshed by the open air whipping through her braids while delivering mail in her antique biplane and cooled by the pristine blue ocean that's free to swim in after landing, Mikura enjoys a carefree, timeless existence - but a dark cloud passes over the Pacific sun when she's informed of her grandfather's death. Mikura's devastated by the loss of someone dear to her but when going through her grandfather's effects after the funeral something peculiar interrupts her mourning.  There's an unopened package bearing her name, but the address isn't her home on Hahajima but a place called "Electric Island"-   and there are also stacks of ledgers, notebooks and charts that are plotting 'sightings of Electric Island' stretching back decades - and scattered all over the Pacific Ocean.

How can an island be in a hundred different places? And how could entries into the ledgers have continued after her grandfather died? Yet as incredible as it seems Mikura is ready to believe it - it's far too substantial to be a prank and far too detailed to be madness. Against the bafflement of friends, relations and neighbours alike who are convinced she's drunk too much saltwater and gone crackpot loco chasing down the hazy mermaid tales of fishermen in their cups, Mikura is determined to complete her grandfather's work, discover the truth about this mysterious mobile island, and deliver the package that's been left to her. However, her grandfather was searching for Electric Island for thirty years and he couldn't find it, so what chance does she have? It's a big ocean to cover, and she only has a rickety old stringbag to explore it in...

...but it's no hardship when there's so much to see. Wandering Island is if nothing else a beautiful manga that transports you into its island idylls with realistic scenes in true-to-life detail, and importantly all clearly hand-drawn and not filtered photographs either. There's always the rationalist niggle in the back of your mind that having Mikura casually pottering around the ocean in her vintage biplane with just a cat for company and a bikini to wear is a tall, implausibly indulgent order in this day and age, no matter how much of a backwater the Izu Islands may be, but the level of detail invested in the art nonetheless allows her to inhabit the world completely and believably and not just as an overlay stuck on top. Oddly enough, reading Wandering Island reminded me of all things Blame!. The two books are of course completely different in tone and content but there are similar extended dialogue-free sections that just let you tune into the atmospheric beat from panel to panel, and Mikura's finger-drumming pondering as she considers the next angle to approach Electric Island.

As she gets lost in the sky the promotional materials for Wandering Island draw comparisons to the spirit of Hayao Miyazaki and his well-documented love of the wonder of flight, probably hoping for some fame by association with the great name, but I don't believe it to be necessary because I actually think Wandering Island captures that spirit better than Miyazaki often did himself. However many aeroplanes feature in Miyazaki's later movies, from Howl's Moving Castle right up to The Wind Rises, they are distracted by a message to bring them down to earth,  whereas Wandering Island with its untroubled magical-realist tale of a modern myth has a purer focus and less to tie it down as it sweeps you up to soar into the great blue yonder. Mikura isn't just a pilot, she's an aviatrix, with all the charming youthful pre-war spirit of idiosyncratic achievement and adventure that the term implies. When she can't afford a GPS unit, the hand-annotated charts, bundles of notes held together by bulldog clips, and tidal patterns sketched out in chalk on the tarmac rekindle our own sense of involvement.

It isn't all just picture-postcard landscapes either, and Wandering Island does take time to rove over character as well. The question is raised at just what it is provoking Miukra on her mission - as much as she praises her grandfather for giving her an outdoorsy life, there's the occasional lapse into honesty where she slumps under the under the sad resignation that she's not living her life, just the existence that her grandfather vicariously set her into - and as Mikura spends empty evenings disconsolately plinking targets with little plastic balls snapped from her grandfather's closetful of Airsoft guns it conveys her sloughs of despond at wasted life more grimly than her just mooning around weeping about how hard everything is. Her house after returning home from the funeral at the start of the book is empty and sepulchral, but by the end its tumbledown and drowned in kipple, a pretty literal metaphor for how Mikura's still got baggage. With the electricity cut by unpaid bills she takes a cold bath by torchlight before lurching out buck-naked to mechanically scribble some more notes down, but it's not a bright-eyed Eureka! skip but a bag-eyed zombie totter and she doesn't get dressed not because she's distracted by inspiration but because she's enervated by fatigue. Mikura reflects on an old, dead friend who she also believes was another searcher for Electric Island and prays that he reached it - but is it as much for him or for herself hoping there is a treasure worth all this effort? Wandering Island doesn't reflect on these lows for long - Mikura's straightforward can-do spirit prevails - but the interludes do show you something of what she's sacrificed to feed her consuming obsession and in case your attention is drifting off from the lapping tranquillity of the rest of story it gives you something to chew on.

You can also get your teeth into a wonderful additional feature which really improves this volume's value-for-money, which is the inclusion at the end of the book of an essay which provides a fascinating insight into Wandering Island's setting and its various subtle historical and literary references. This isn't just a copy-paste of a quick Google search listing either but has genuine research invested into it (there's even an aside musing on the differences between Modern and Middle Dutch) and sugared with extra little factoids. It's an amusing bit of trivia to realise that these verdant island paradises hundreds of miles from anywhere are, officially, part of the Tokyo Metropolitan region... and so going back to the opening paragraph of my review, understanding this makes the whole of Wandering Island feel like a cheeky snook cocked at the routines of the urban grind that preoccupy so many other stories, giving their writers a pinch to startle them up from looking down into the pavement.

The essay then makes for a superb addition that I thank Dark Horse for taking the trouble to include. The commentary is especially valuable for a story with a realistic backdrop and the sense of context provides three-dimensional depth to the manga's imagery, both meriting re-reading and making that reading feel like a more significant, weighty experience. Dark Horse have really good form for this sort of feature in previous manga releases and long may it continue.

Talking about wider contexts though, while this book is numbered "Vol. 1" and ends optimistically with a "To Be Continued..." sign I wouldn't hold your breath for Vol. 2 of Wandering Island anytime soon.  This isn't a series that we're picking up late with multiple volumes to catch up on as is usually the case with manga licenses: Kenji Tsuruta is a notoriously unhurried mangaka and even though Wandering Island began publication in Japan as far back as 2010, in seven years there has only been this one lone volume collected - and that was in 2011! The story does continue past the end of this book - chapters updated erratically in the Afternoon magazine into 2012 before Tsuruta moved onto other projects and work on Wandering Island petered out - but given such a long hiatus it's safe to say that the story is effectively abandoned. Given that, it's disappointing that Dark Horse didn't take what uncollected chapters exist and include them in an expanded, definitive edition. Dark Horse has published unfinished manga before with its elegiac retrospectives on Satoshi Kon's Opus and Seraphim 266613336 Wings (both of which are advertised at the end of this book, probably anticipating a similar readership with interest in esoteric offbeat tales) but in those instances they did at least supply all that was available - knowledge that Wandering Island has been truncated only feels frustrating and does scuff the gloss on what could have been a pretty complete package.

On reflection, though, maybe this book's end is a good hopping-off point as well. As we wave Mikura off as her Fairey Swordfish dwindles and disappears into the horizon,  she leaves us with the determination to see things through that may one day take us away from our routines and into something splendid.

8
A gorgeous ramble through an endless summer, which makes it a dismal shame that this incomplete release means we'll probably never see the end of the journey.

LATEST REVIEWS
Higehiro: After Being Rejected, I Shaved and Took in a High School Runaway (Vol. 1)