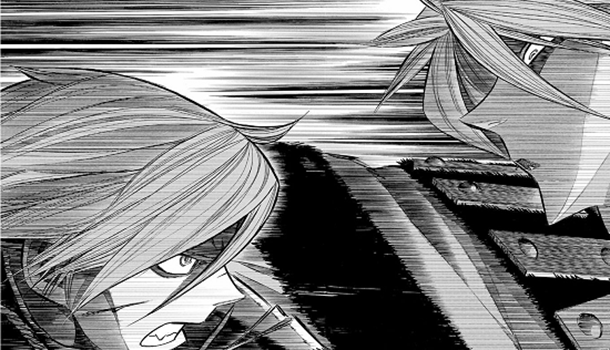 2015 is the 500th anniversary of the first formal proclamation of Swiss neutrality in 1515. Switzerland is, of course, famous for its longstanding dedication to stepping aside from the flow of life and times in the rest of the continent - it's been the one speck of white in the middle of Europe whether the map was overrun with Nazi red or merged into EU blue; the country didn't even join the UN until 2002.
Despite this reputation as a peaceful place of untroubled Alpine serenity though, the old medieval Swiss confederacy was a major player in power-politics that freely mucked in along with Europe's wars with its own ambitions of conquest and empire - indeed, Switzerland's proclamation of neutrality was less a principled commitment to pacifism and more a way to duck their head below the parapet and avoid further retribution after suffering a catastrophic defeat at the Battle of Marignano. The manga's publisher Vertical expressed disappointment over Twitter that the anniversary year hasn't caused a big media focus on Wolfsmund, but that may be because it's not the peaceful future but the bloody past that Mitsuhisa Kuji draws from - Switzerland was recently declared the "Happiest Country in the World" in the United Nations' 2015 World Happiness Report, but there's not much of that joy and thanksgiving on show in this brutal tale of the Swiss cantons struggling for independence from the dominance of Austria!
As the story reaches its climax in these volumes, will the thrill and energy of exciting battles propel it to the peak of manga excellence or will it lose its footing and plunge down into a forgettable crevasse?

At the end of volume four of Wolfsmund the cruel -and capable - castle bailiff Wolfram had been seeing off all the attempts of the Swiss rebels to breach his besieged fortress, but with the courage of valiant sacrifice and a fistful of gunpowder a hole has finally been blasted through the gates and a chink opened up in Wolfram's armour. Can this cold master of the mountains keep his cool when the Swiss raise the heat? Wolfsmund is Wolfram's seat of power, but it could well become his prison - and if Walter Tell, still burning for revenge after the butchering of his family, has anything to say, it'll become his tomb. The battle is not yet won though, and ever the careful planner Wolfram may yet have prepared an ace in the hole to blow up in the rebels' faces...

Like volume four before it, volume five is occupied by the ongoing battle to capture Wolfsmund. Kuji's sharp and angular art style continues to be an excellent fit for battle scenes so any lover of action will be well-served here. Kuji is an expert at infusing still pcitures with a sense of speed - the awe-inspiring mountain escape of Walter in a previous volume is reprised in a new and interesting way as he uses his climbing and archery skills to veritably hurtle around the walls and rooftops of the castle like a careering missile - it's heart-stopping to watch. His confrontation with Wolfram (sit down and stop yowling about spoiler alerts, Internet, you all knew that it was coming) is also a dramatic dagger-swift duel that slices through blows and parries so keenly that you'd fear that you're going to cut yourself on the very paper. The excitement of the scene is improved by Kuji resisting the easy temptation to have Wolfram degenerate into a mewling pampered mess when he's directly threatened - Wolfram walks the walk as well as talks the talk and he stands and fights with genuine skill and realistic threat to the other characters. This certainly invests the reader in the action because the result is by no means a foregone conclusion - plenty of times in the previous volumes we've had heroes and protagonists come to untimely ends but while the cover of volume six unfortunately tips the hand of the outcome (the cover image is Wolfram literally stripped and bound) you certainly enter into it at the end of volume five with no leading expectation about where the knife will fall.

So the rivers of blood continue to flow freely through Wolfsmund, but they reach such a flood that we threaten to drown in it. I love nothing more than a refreshing and invigorating tranche of healthy violence and hearty blood'n'guts but there are times when Kuji really does overblow the violence beyond viciousness and into plain silliness. There are of course a few more gruelling (but fascinatingly inventive...) scenes of outright torture porn that are Wolfsmund's trademark, but it also affects the more central action. Despite the fact that the Swiss on the one hand are a small band of revolutionaries and the Austrians on the other are an equally small besieged garrison with no way out, both sides have a seemingly inexhaustible supply of redshirts to fling into the meatgrinder (literally so - one of Wolfram's traps is to mangle Swiss to paste in a giant set of gears). It rather lessens the impact of each death when I'm not really reading a battle, I'm idling during a game of DOTA 2 and watching the creeps march up and down the lanes.

At one point the Swiss fill in a flooded pit that's blocking their path by literally drowning themselves in it until a piled heap of their corpses allows their comrades to climb up over the backs of their burnt, swollen and arrow-riddled friends to reach the other side. I'd have used a ladder, but I guess that works too?

Once the Swiss get past this boundary and breach the castle walls the action shifts to breaking through each individual wing and tower of Wolfsmund like they're squares on a game board. There's something charmingly old-school about all the maps that are set out as the various forces move around the castle. The comprehensive dedication to setting out the wider situation and understanding all the players' positions rather than just stirring everything into a cloudy broth of vague action panels is redolent of classic Eagle and Battle Picture Weekly comics, albeit rather bloodier than I think DC Thomson can stomach! In previous reviews of this series I've remarked how one of the manga's strengths was how castle Wolfsmund itself was a character with its grand amphitheatre of tragedy on which to act out the story, and it continues here as the Swiss search out hidden chambers and oubliettes in an interesting exhibition of architecture and fortress science.

It's not a spoiler to say that the Swiss eventually defeat Wolfram and seize castle Wolfsmund - as I said earlier, the very cover of the final volume is a picture of Wolfram being yanked around with a noose on his neck. This develops into something of a problem when it happens with half of the volume still to go - Wolfsmund is such a focus of this series, but what happens when that focus is taken away? The final chapter directly tells you that the Swiss are going to go on and win their campaign, as if Kuji couldn't be bothered to muster the pretence of a plot anymore, and an attack on a different Austrian castle trots through the same beats in one chapter as were tempestuous struggles over two volumes at Wolfsmund itself. I'm not normally one to be so disparaging about "filler" as other anime and manga fans - I'm quite content to have content, regardless of the origin - but it does acutely feel here that the story is over and Kuji is just filling out the minimum page count to send the book off to the printers. Wolfsmund, Wolfram and Walter had so much personality that once they're gone the manga feels rather listless and pointless, although I suppose that does speak well of the earlier chapters that they had such impact.

Still, Kuji does give you a reward for sticking with the second half of volume six despite its apparent redundancy. Seeing the Austrian troops in the mountain refuges slowly freeze can be quite affecting, showing the Kuji isn't just a one-note mangaka and can bring more to the table than just bloodletting. While the sex that populated the early volumes of the manga is again largely absent from these releases, you do still get to enjoy a few pages of the Swiss indulging in a roll in the hay to celebrate their victory and sire a new generation of Swiss to repopulate the cantons. We struggle, but we must make stern and sedulous efforts for the good of the nation - just lie back and think of Helvetica! The supposedly charming story of the young soldier trying to find a lute to celebrate the triumph and reconnect with his comrades does become a little less heart-warming though when you realise that he's doing it in order to get an invitation to the drunken barn orgy. Kuji also does overegg the pudding again with one admittedly-small scene where a deceased woman is laid out for burial - with a cleavage-flattering low cut blouse that cuts a devastating slit all the way down her front. Ah, darling, you'll be the most ravishing cadaver in the morgue.

In final summation, Wolfsmund continues to be a real treat for lovers of action manga - these two volumes feature plenty of fierce fights and calamitous collisions with gory spills and adrenalin thrills. This action may be weighed down by a number of problems with sometimes ludicrous characters and a directionless plot, but ably realised by swift, dashing artwork it still retains enough power and energy to propel you all the way to the end.

7
A thrilling story of a dramatic battle that becomes rather aimless once that battle is won.