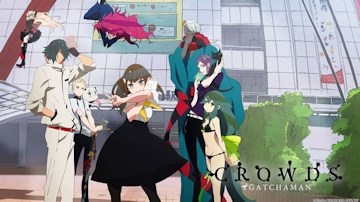 
We were expecting two new license announcements from new distributor Animatsu Entertainment this week, and now we have them - and a couple of juicy acquisitions they are too!

The company confirmed tonight via Twitter that they have picked up the following:

Gatchaman Crowds - Tatsunoko's 2013 anime reimagining of the Gatchaman franchise will be coming to the UK - there are no further details on the plans for this release at present, although we imagine it will follow Sentai Filmworks North American release and thus not include the "Director's Cut" version of the final episode.

Akame ga Kill! - White Fox's anime adaptation of this popular dark fantasy manga is also set to arrive on our shores; again there's no further news on the exact plans for this title at present.

These two titles join Chaka: The Coffin Princess, The Comic Artist and His Assistants and Blade & Soul to make up five of the eight confirmed anime licenses the company currently has signed and ready to release.

Which of these titles are you looking forward to? Let us know in the comments!