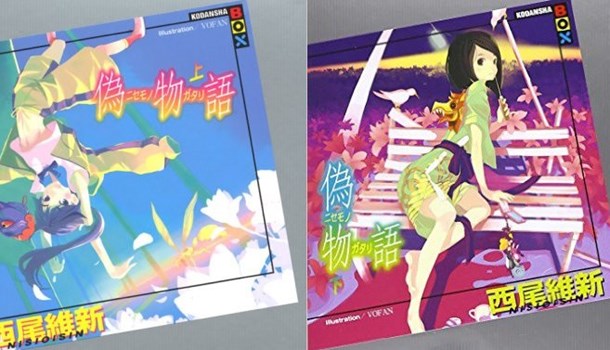 
It's been a massive weekend for licensing news over in the US courtesy of Anime Expo at the Los Angeles Convention Center. Although the event is only half-done at the time of writing this, we already have plenty of news to get our teeth into regarding manga and light novel announcements, so let's dig in on a publisher by publisher bases, shall we?

Having already released Kizumonogatari and with their volumes of Bakemonogatari in production (the first of which is due in December), Vertical Comics big announcement from the show is that we'll be seeing further Monogatari light novels from Nisio Isin in English, with Nisemonogatari now also licensed by the publisher. Expect to see the first volume of that released in April 2017.

Needless to say, Kodansha Comics had another Attack on Titan-related announcement to make, with interactive puzzle book Attack on Titan Adventure acquired by the publisher.

Beyond this, the company has picked up the rights to Fire Force, the story of a supernatural firefighting team from the pen of Soul Eater creator Atsushi Ohkubo, as well as the manga adaptation of fantasy-action light novel series from the creator of No Game No Life, Clockwork Planet.

Finally, the company has acquired Ichi-F: A Worker's Graphic Memoir of the Fukushima Nuclear Power Plant, to be released as a single omnibus edition volume on March 7th 2017. The series tells the true story of a worker within the Fukushima power station in the aftermath of the 2011 Tōhoku earthquake and tsunami.

The company will also be adding some digitial titles to Comixology, including Tsutomu Nihei's Noise! and a series of former Del Ray titles consisting of School Rumble, Alive, Princess Resurrection and Nodame Cantabile.

There were plenty of new licenses on show from Seven Seas Entertainment at their panel, and a varied bunch they are too.

First up we have Dreamin' Sun, a drama series from the author of Orange that will see its first volume released in English in May 2017.

There's also something for Vocaloid fans via one-shot light novel The Disappearance of Hatsune Miku, while cat lovers will be able to pick up the first volume of Plum Crazy! Tales of A Tiger-Striped Cat in July 2017.

Fans of Magical Girl Apocalypse will surely want to pick up spin-off series Magical Girl Site, the first volume of which will arrive in English in February 2017. Finally, it wouldn't be Seven Seas without a new monster girl manga, and the publisher duly delivers with Species Domain, which will be getting an English release at an unspecified date.

There's more Vocaloid antics in English on the way from Dark Horse Comics, with news that the publisher has picked up Hatsune Miku: Rin-Chan Now!

Also coming our way is another Evangelion spin-off in the form of Neon Genesis Evangelion: Legend of the Piko-Piko Middle School Students, where NERV runs a middle school that recruits gamers from around the world to be Evangelion pilots.

Finally, we have some Lovecraftian manga courtesy of H.P. Lovecraft's The Hound and Other Stories. All three of these titles will arrive in English in 2017.

Needless to say Yen Press had both manga and light novel announcements to show off, with their highlight arguably being the acquisition of both of those formats of Rokka: Braves of the Six Flowers.

Meanwhile, the publisher are adding the manga of Reki Kawahara's The Isolator to their existing light novel releases of the series, the first volume of which will arrive in English in 2017. Hot off the back of its recent anime adaptation, The Big Order's original manga will also be getting an English treatment early next year.

Other forthcoming releases unveiled at the show include action series Murciélago, which will debut in spring 2017, and Smokin' Parade, from the creators of Deadman Wonderland.

At a later panel hosted by Kadokawa at Anime Expo, it's also been confirmed that Yen Press will be releasing ERASED's original manga as two-volume hardcover omnibus editions from next spring, as well as Bungo Stray Dogs starting this December. The company also discussed its vision of making 100% of its output available digitally, although there's no promise as to when that might become a reality.

Last but not least we have Viz Media, who confirmed that they'll be releasing the Dragon Ball Super manga in print from spring 2017 as perhaps their biggest announcement.

Also coming next spring is The Water Dragon's Bride as part of its Shoujo Beat imprint, while Viz Signature will be bringing forth Mobile Suit Gundam Thunderbolt's manga.

Meanwhile, Yu-Gi-Oh! Arc-V's manga will be getting a print release, while the manga daptation of Revolutionary Girl Utena will be released in a deluxe box set with hardcover volumes and posters - both of these titles will see the light of day next spring. Finally, Rurouni Kenshin will be seeing a release via 3-in-1 omnibus editions from winter 2017.

Also slated for a future relase is manga drawing guide from JoJo's Bizarre Adventure author Hirohiko Araki - How to Create Manga will retail for $19.99, but no release date is currently specified.

So there you have it, lots of news to sink your teeth into. Which release are you looking forward to getting your hands on? Let us know in the comments!