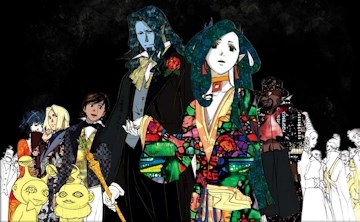 
It's going to be a busy weekend for anime licensing news thanks to a little thing called the MCM London Comic Con, and distributor Anime Limited have set the ball rolling early with the first of three new announcements from them this weekend.

This first new acquisition is GONZO's 2004-2005 TV series loosely based upon Alexandre Dumas' well known novel, Gankutsuou: The Count of Monte Cristo. The series is currently provisionally slated for a UK release late on DVD, Blu-ray and digitally in the first quarter of 2015.

Here's a little more about the series:

Albert is a young man of privilege in Paris, but the trappings of his aristocratic birth leave him bored and unsatisfied. Seeking adventure, Albert’s restless spirit leads him to a festival on the moon – and to the Count of Monte Cristo.

An enigmatic man of charm and wealth, the Count of Monte Cristo’s charisma and sophistication captivate Albert. The fascinated youth invites the nobleman to mingle within the upper echelons of Parisian society, and the Count is soon courting the favor of France’s most powerful families. Little does Albert know, as his new friend walks the ornate halls of the highest class, the Count of Monte Cristo wants only to bring them crashing down through vengeance.

For the full announcement, check out the All the Anime web site.