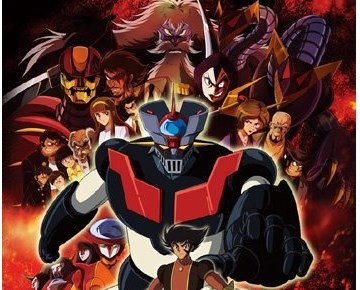 
Following on from their recent announcement that they have licensed the Violence Jack OVA for North America, US distributor Discotek Media have now unveiled no less than four additional licenses for fans to pore over.

First out of the hat was Zombie-Loan, with this thirteen episode manga adaptation from 2007 slated for a subtitle-only DVD release on September 30th.

Moving onto 2015 releases, the company have also announced their intention to release 2008 shoujo romantic comedy Itazura na Kiss - again, the release will be DVD-only and subtitle-only.

Next up, 2009 mecha series Shin Mazinger Z Impact's entire 26-episode TV series will be getting a 2015 TV release with Japanese audio and English subtitles.

Finally, and looking a little further back into the anime archives, Super Dimension Century Orguss will also be getting a release, with the full 35-episode TV series getting a DVD release - the first seventeen episodes will sport their previously produced English dub, while the entire series will also containg Japanese audio and English subtitles.

Are you excited about any of these releases? Let us know in the comments!