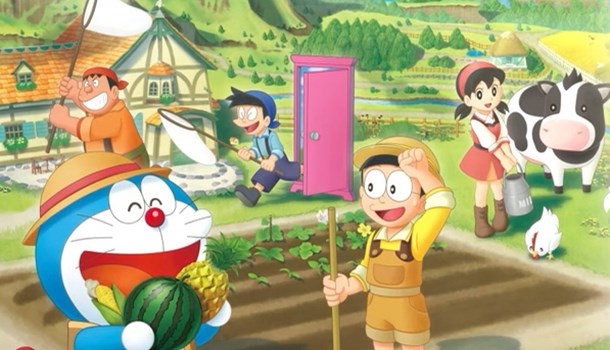 
Bandai Namco have released Doraemon Story of Seasons: Friends the Great Kingdom on Switch, PS5 and STEAM. The crossover once again places the cast of the beloved Doraemon series into the gaming world structure of Story of Seasons, with a new story to uncover.

From the Press Release:
Experience a casual farm simulation gameplay set against a picturesque landscape with realistic natural elements such as weather and changing seasons, designed with a delightful storybook feel. Watch firework displays, gaze into the sparkling night skies or chase the sunrise. Relax and create unforgettable memories with your friends on planet Illuma.

More than 80 of Doraemon’s secret gadgets are featured, for more fun and a dream-filled farm experience! Use secret gadgets such as the “Hopter” and “Mini Raincloud” to build a farm in the clouds or use the “Adapting Ray” to go underwater and harvest pearls! You can even bring a friend on your adventures on the planet of Illuma in two-player offline mode.

Also coming out today, as part of the Season Pass, is the first DLC “Winter Tales”, including new outfits, a furniture set and an additional mini story, bringing a new season for Noby and friends to discover. Expect two further DLCs to come out, adding new experiences and fun to the game! The Special Edition and Deluxe Edition including bonus seed sets as well as the Season Pass are available.

Finally, a demo is also available so you can try before you buy.