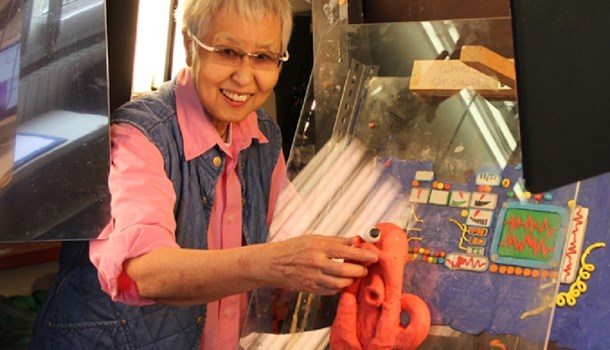 
Our friends at Kotatsu Festival have sent us details of an online event aimed at showcasing the work of women in animation. On July 25th, there will be two lives-treams on the Festival's Youtube Channel, the first at 11am, followed by an evening stream at 6pm.

The festival will use its channel to present a free online screening of shorts from an all-female line-up of directors ranging from university students to the current crop of animators working today and an animation industry legend who we are celebrating with a centrepiece presentation featuring an interview we have recorded with her.

Yusaki is an award-winning claymation pioneer who emerged in the 1960s after moving to Milan and establishing her own independent studio, Studio Yusaki. Her works consist of commercials, films, and children’s television programmes which were made for public broadcasters such as RAI and NHK. Yusaki’s famous works include clay animation advertisements for the liqueur Fernet-Branca, and popular TV character Peo the blue dog. We have programmed four of her works, Uog, Polis, Oto and La Rosa Dei Venti, and we have an interview with her where she talks about her career.

Miho Yata (やたみほ) Image from The King of Amechau Country.

Tokyo-based Miho Yata is a graduate of Shirayuri Women's University, and is currently a full-time lecturer there. Since 1999, she has produced many animations and content, producing for TV commercials, teaching materials, picture books and illustrations, as well as holding workshops on animation, and visual toys. Her works are based on the art of knitting and her most famous work is Knit & Wool, which airs on NHK E-TV for kids early in the morning. We have programmed The King of Amechau Country to show what she can do.

Arisa Wakami (若見ありさ) Image from Birth - The Dance of Life

Arisa Wakami is a professor at Tokyo Zokei University and a lecturer at Joshibi University of Art and Design. More importantly, she is an animator and works with both hand-drawn and stop motion animation who has utilised a range of “materials” from people to sand on glass boards. Her works cover films, TV programmes and workshops and they feature poetic imagery and have been screened at famous festivals around the world. We have programmed Blessing, 0-5, chorus and her part of Birth - The Dance of Life.

Kurita represents the next generation of animation talent. A recent graduate of Tokyo Polytechnic University, she combines colourful hand-drawn images with computer manipulation. Her work, A day when became a Asparagus man, has been selected for the Tokyo Anime Award Festival. We have selected that wonderful work and her film Brassiere Cat as the titles we will screen.

The festival will also have a selection of graduate works from some of the students at the Graduate School of Film and New Media, Tokyo University of the Arts (titles confirmed shortly).

So mark July 25th in your diary!