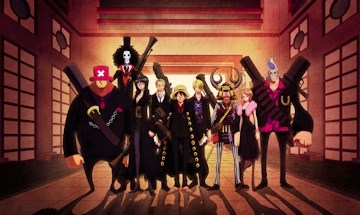 
Today saw the first day of the Birminham MCM Comic Con take place, and as is now tradition distributor Manga Entertainment had a panel at the event, allowing them to lift the lid on some new license announcements.

Following on from the on-going release of the TV series in the UK, the first announcement out of the (straw) hat was One Piece - Strong World, the tenth One Piece film, which will be released on DVD and Blu-Ray with a release date of June 30th 2014.

Another franchise to get a lot of love from the distributor is Ghost in the Shell - Tow Ubukata's film series Arise has been confirmed for a UK release (with more details to follow as they're cemented), while the original Ghost in the Shell film will be released as a Blu-Ray Steelbook later this year.

The panel also brought more news regarding Attack on Titan's release - the first volume will be released on September 15th 2014 in DVD, Blu-Ray and Collector's Editions.  The Collector's Edition package contains an additional DVD with over 100 minutes of bonus footage, a 24-page booklet and a box with space for the second volume of the series.  The second half of Attack on Titan should be released before the end of 2014.

In other news, Evangelion 3.33: You Can (Not) Redo is still tentatively slated for an August release and Psycho-Pass doesn't yet have a confirmed date but will be hitting the UK before the end of 2014.