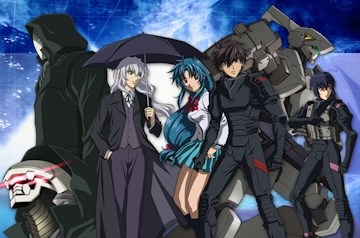 
After yesterday's slew of announcements and news from Manga Entertainment, this Sunday at London Comic Con brought with it the broader Anime Industry panel, giving representatives from Anime Limited (Andrew Partridge) and MVM Entertainment (our very own Ross Liversidge) some time in the spotlight alongside Manga Entertainment (Jeremy Graves).

Before this panel, we exclusively revealed that MVM Entertainment have licensed The Garden of Sinners for an October UK DVD release.  Other licenses announced by the distributor consist of: Further Patlabor OVAs, Bunny Drop, Blast of Tempest, Kokoro Connect (which we've confirmed to be DVD-only) and The Familiar of Zero Season 3.  Formats are yet to be confirmed on many of these. The company have also confirmed that Bodacious Space Pirates will be re-released on Blu-Ray.

Meanwhile, Anime Limited have announced that they will be releasing Psychic School Wars (aka Nerawareta Gakuen) on both DVD and Blu-Ray, and with both English and Japanese language options.

Also picked up by Anime Limited is all of Full Metal Panic, which the distributor will be releasing on DVD and Blu-Ray - the company are currently looking into what materials they can get a hold of with a view towards a potential Collcector's Edition.

During the panel's question and answer stage, the prospect of Sailor Moon being licensed was raised, with Andrew Partridge and Ross Liversidge both noting that it didn't perform well on either TV or DVD during its prior UK release, even if they would like to see it licensed.

The prospect of a license for Kyoto Animation's Free was also raised, with Mr. Partridge pointing out that it is a difficult proposition as someone currently holds worldwide rights outside of Japan, while there's also a significant holdback on any Blu-Ray release of the show outside of its homeland.

On that note, Sgt. Frog and Macross were also noted as being difficult to pick up for various reasons, with the former having passed through numerous hands while the latter is held up in rights issues even though many involved in the production of the various iterations of the show would like to see it gain a wider release.

In brighter news, Andrew Partridge suggested that a UK release of Hyouka would be more a case of "when" rather than "if" (although he was also keen to note that it wouldn't necessarily come from him), while Jeremy Graves strongly hinted that something is "in the works" regarding other Kyoto Animation series Tamako Market and Love, Chunibyo and Other Delusions.