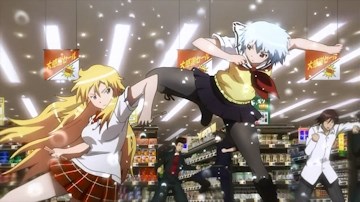 
This weekend's Scotland Comic Con has, of course, brought with it the traditional panel from Manga Entertainment, and just as traditionally it also brought us some new license announcements.

Surprisingly, the two major announcements on the card are to be Blu-ray only releases, with the company picking up the following titles for the UK:

- Good Luck Girl! (aka Binbogami-ga!) - Sunrise's adaptation of a supernatural comedy manga about a decidedly lucky girl who has her good fortune put to use by a God of Misfortune.

- Ben-To - This light novel adaptation from David Production follows a group who train hard to win the war to procure low-priced bento boxes in battle against other hungry bargain hunters.

We don't currently have estimated release dates for these titles, but as mentioned they wil be Blu-ray only releases with both English and Japanese audio and English subtitles.

In other news from the panel, it's been confirmed that Fairy Tail Collection 3 (comprising parts five and six of the series) will be released on DVD and Blu-ray, most likely in January.

Dragon Ball Z: Battle of Gods has been confirmed for DVD, Blu-ray and Collector's Edition SKUs upon its November 10th release date. All three versions of the film will contain both the theatrical and Director's Cut editions of the film, while the Collector's Edition Blu-ray will contain a set of four art cards, a slip cover, and a DVD of bonus materials not available in the standard Blu-ray release (but included with the DVD release).

Bayonetta: Bloody Fate is slated for a November 26th release date, complete with a Steelbook Edition of the film. Harlock: Space Pirate will be released on DVD and Blu-ray in late February.

With part one of Attack on Titan almost upon us, it's also been confirmed that the second half of the series on Blu-ray will contain a similar booklet to that found in part one.

Are you excited by these announcements? Let us know in the comments!