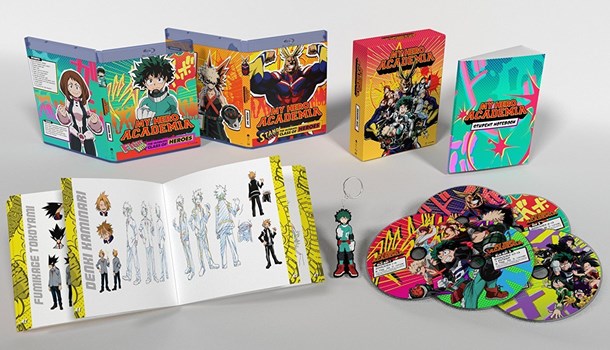 
It was a few weeks ago that we broke the news that Universal Pictures would be handling the UK release of My Hero Academia's first season on home video, on behalf of Funimation Entertainment. As of this evening, we now have some more details as to their precise plans.

It's now been confirmed that the My Hero Academia Complete Season 1 collection will be released as a Limited Collector's Edition DVD/Blu-ray combo pack.

The release will sport two DVDs and three Blu-rays, containing the complete first series as well as a number of extras comprising Meet The Characters, Anime Expo Panel, Animefest 2016 Artist Sketches, Inside The Episodes (one for each episode), Interviews with Cast & Crew, Simuldub Trailer, Textless Songs, and full trailers.

This collector's edition will also sport a number of physical extras, namely  a keyring, a limited edition character art book, and a notebook. Check out the exploded pack shot above to take a peek.

This release is set to land in the UK on Monday, 15th May, and as of this weekend you'll be able to find the title available for pre-order on Amazon UK.