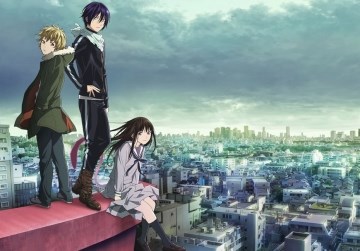 
Recent days have seen a number of titles being released or distributed via Manga Entertainment appear on Amazon's UK store for pre-order, and amongst that number is one title that we haven't seen officially announced yet.

That title is Noragami, the first season of which appears to have been scheduled for a Complete Series 1 Collection release for September 21st 2015. The series will be released on both DVD and Blu-ray, and with both English and Japanese audio with English subtitles.

As the series was streamed to the UK by (and is still available on) Animax UK, we suspect that the title is actually an acquisition by Kazé, although FUNimation are handling the US release which may suggest an acquisition by Manga Entertainment directly.

Here's the blurb for the series, which has had a second second season recently announced in Japan:

Yato may just be a minor god now, but he’s determined to make it big and he’s got a plan. Unfortunately, things just don’t seem to be going his way. He doesn’t have a single shrine dedicated to him, his partner has just quit, and now he’s got to find a new divine weapon. Just when things look bleak, he meets a girl named Hiyori and changes her life forever.

Are you excited for a UK release of the series? Let us know in the comments!