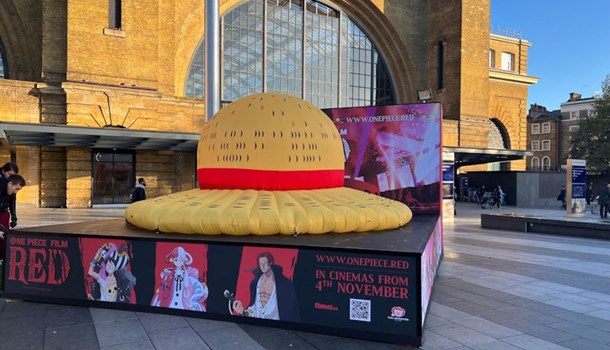 
One Piece Red arrives in UK cinemas today, and to celebrate the occasion, this rather striking giant One Piece Straw Hat has appeared outside of Kings Cross station. This iconic piece of headwear will be at the station all weekend, so why not pop down if you're in the area and take a selfie?

One Piece Film: Red is the latest feature film based on characters from the best-selling Weekly Shonen JUMP manga series about a crew of pirates sailing the seas in search of a legendary treasure. The series’ original creator Eiichiro Oda is overseeing the project as Executive Producer, and also designed the original characters for this brand-new story, including Uta, the most beloved singer in the world - and the daughter of Shanks, the legendary pirate who inspired the series’ protagonist Monkey D. Luffy.

One Piece Film: Red is directed by Goro Taniguchi, who previously helmed One Piece: Defeat Him! The Pirate Ganzack!, the very first One Piece animation, with a screenplay by Tsutomu Kuroiwa (One Piece Film: Gold).