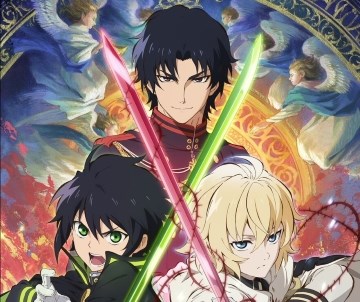 
Having simulcast on Viewster's streaming service courtesy of Anime Limited, you might have been forgiven for thinking that Studio Wit's anime adaptation of shonen manga series Seraph of the End might also be coming to the UK on home video from the same source.

However, this particular series proved to be a rare one, in that Anime Limited were only able to acquire streaming rights for the series, with rights holder Universal Pictures hanging on to the home video rights. We can now see the fruits of this decision, as an Amazon listing has now emerged revealing their plans for the series.

Furthermore, a listing on Zavvi's web store suggests that this will be a limited Collector's Edition release containing a 134 page book of interviews, character profiles and artwork (reprinting everything from the original Japanese releases) together with artcards, poster and trading cards unique to this edition.

Given this move, we'll also be keeping our eyes peeled for a similar strategy with The Heroic Legend of Arslan, another Universal Pictures show recently simulcast via Anime Limited in the UK. Indeed, to that end Manga Entertainment's Jerome Mazandarani has commented on Twitter that "Universal holds the rights to all of their Japanese anime productions and will be self-distributing them moving forwards".