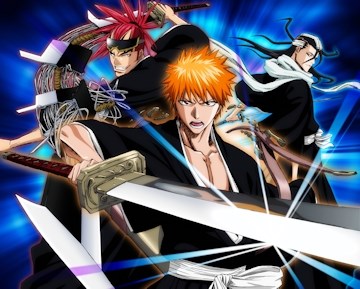 
It's a time of major change for the UK anime streaming ecosystem - we've already seen Anime Limited announce a partnership with Wakanim, and now we have another major announcement to pore over.

In short, Sony Pictures Television are launching a UK version of their Animax anime broadcast service, which will be geared towards streaming video on demand content to our shores.  As part of this announcement, the company has signed a deal with Viz Media to stream their content, which initially includes series such as Bleach and Black Lagoon amongst others.

This is a deal that has been a long time in the making for the UK, and has been in the works for at least the past year, while more recent hints as to this particular partnership have been visible thanks to the Sony Movie Channel's recent decision to start airing Viz Media/Kaze properties in a regular slot.

The service will be launching this autumn on the Animax TV UK web site, which is not yet active.  If you want to know more, here's the full press release.

London, 15 October 2013. Sony Pictures Television (SPT) Networks has announced it is to launch a UK version of its anime channel, Animax, as a subscription video on demand service. In line with the launch, SPT Networks UK has agreed a multi-year volume deal with anime content provider VIZ Media to secure exclusive content for the new service.

Animax is SPT Networks' global anime channel brand reaching 60 million households in 17 countries and available in 14 languages. The UK SVOD service will be scheduled specifically for UK anime fans and launch online at www.animaxtv.co.uk  this Autumn. It is expected to roll out on more platforms and devices soon after.

Initial titles selection from VIZ Media include UK premieres such as Death Note, an action thriller about a high school student who discovers a supernatural notebook, and the blood-curdling Vampire Nights thriller. Other selections include Bleach, which follows the adventures of Ichigo Kurosaki who obtains the powers of a Soul Reaper, and Black Lagoonabout a team of pirates who smuggle goods in and around the seas of Southeast Asia.

Kate Marsh, senior vice president for SPT Networks, Western Europe said: “With its roots in Japan, Animax is the leading international channel brand for anime, so launching a bespoke UK version is great news to fans here. Securing this exclusive deal with VIZ Media ensures we will be first to market with key releases and offer some of the best series directly from the centre of the anime world.”

"We are really happy to partner with Animax channel,” said Hyoe Narita, VIZ Media Europe’s chief executive officer. “As a subsidiary of one of Japan's largest publishing houses, we want to be able to share our passion for Japanese content with everyone, everywhere and give the opportunity to help viewers discover and enjoy our titles. Animax is the perfect channel to help us achieve this mission through this exclusive deal.”