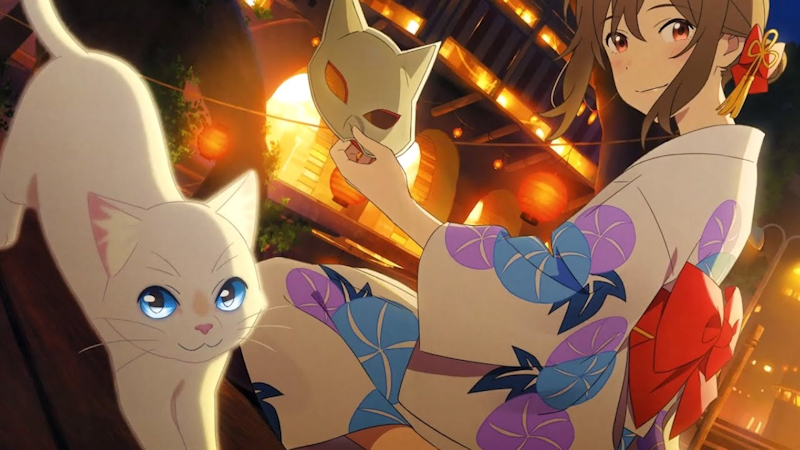 As if to prove that Netflix sees anime as one of the tent-poles of its service and a way in which it can outmanoeuvre rivals like Disney+ and Amazon Prime, this new Netflix Original Anime takes a Ghibli-style turn with a mix of childhood innocence and the supernatural.

Miyo is a troubled young girl with a dysfunctional family and a high-school crush. The story shows only glimpses of Miyo's fateful meeting with the "Mask Seller" she met at a cat shrine during a festival, but thanks to him she is now able to turn into a cat when donning the mask. Escaping from the household she has come to hate, Miyo shares her time in feline form visiting the object of her affections, Hinode.

The first thing to say is that I really liked Miyo (aka Muge: Miss Ultra Gaga & Enigmatic). In fact she reminded me of Louise Belcher from Bob's Burgers - smart, sassy and fearless. Her boisterous behaviour and sense of fun really won me over, which makes it all the more heartbreaking when you learn it's an act. At one stage she absolutely loses it with her stepmother, and because you see how happy she could be, to see it was all an illusion is just shattering, and shows just how deeply the actions of adults can affect children.

Investment in the cast is the key to this film's structure, as unlike Ghibli's Spirited Away, the supernatural world is kept at bay until the final half hour of the film. So with most of the runtime set in our world, the story has to hold our attention. The unusual writing, with the origin of the magical elements pretty much glossed over and the cat world held back so late, you need to be invested. This is where the film showcases it's real strengths.

The characters throughout the film feel rounded and fleshed out. Hinode's father has died, and with his elderly grandfather needing to retire, he's under pressure to take care of the family. His desire to continue the family business is hampered by their financial issues, and his domineering mother seems to have control over the rudder of his life. His sister is hot for the hired help and with his studies, Hinode feels he has no agency of his own - all of which make it understandable, if not excusable, when he ignores Miyo's affections and then, embarrassed at being the subject of a love letter read aloud by bullies, outright verbally attacks her. Ignorant of Miyo's own issues of abandonment due to her mother leaving her father, this causes her huge breakdown and cements Miyo's desire to cast aside her human life and become a cat for good, if only to be with Hinode in a form he will show affection to. Honestly, Miyo's reaction to his Hinode's blunt rejection is just brutal to watch.

It's not just the well-realised script by the award-winning Mari Okada (The Anthem of the Heart, Maquia) that works so well either - I was enthralled by the representations of rural Japan at night - quiet country roads surrounded by traditional Japanese houses and local fauna made me realise how much I miss visiting the country. There's a particular beauty to Japan, and the film captures it perfectly.

I have no wish to spoil the film, as there are some wonderful twists awaiting you, but suffice to say I very much enjoyed my time spent with Miyo and her world. If one were to be critical you might posit that the film feels like a Ghibli or Makato Shinkai derivative, and it would be hard to argue. It's not quite as sharp as Shinkai, nor as charming and detailed as Ghibli, but it certainly has charm, wit and a touch of genuine magic that should allow you to lose yourself in it's spell.

Initially released as subtitle only thanks to the ongoing pandemic, the English language version is now available and I have to say that it holds up very well despite the obstacles in producing it. Johnny Yong Bosch and Cherami Leigh voice the leads fresh from their joint work on Tower of God. (You can read our Tower of God interview with Johnny and Kira Buckland who also stars in both, here).

Netflix has clearly set its stall out as a provider of quality original Japanese animation, and with BEASTARS, Carole & Tuesday and BNA: Brand New Animal all landing in the last 12 months, A Whisker Away is just another strong foundation for the Netflix menu. This comes highly recommended.

9
With a cast that feels genuine thanks to Mari Okada's fabulous screenplay, this is a beautiful film with real heart and intelligence to go with the magical fantasy. Wonderful in every way.
COMMENT AND DISCUSS
blog comments powered by Disqus