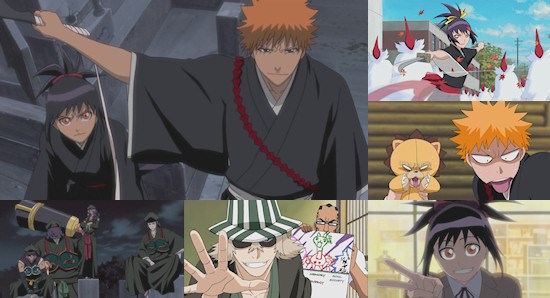 Bleach the Movie 1: Memories of Nobody (Blu-Ray)

It might not feel like it, but it's been three years since we first saw Memories of Nobody make its way to the UK - now, courtesy of Kaze UK and Manga Entertainment, we have occasion to revisit this first Bleach movie as it gets a shiny new Blu-Ray re-release aimed towards those with an urge to consume everything they possibly can in High Definition.  Myself, in other words.

In time-honoured spin-off movie tradition, Memories of Nobody eschews any links to Bleach's main story arcs, and instead uses its major characters to meet up with a new threat - a threat which is initially unknown to us beyond sirens blaring and ever-ominous red lights in a control room within Soul Society to generate some tension right from the off.

Alongside this, things quickly appear to be amiss within the world of the living, as Ichigo and Rukia come across a mass of strange, white creatures - beings with a unique spiritual pressure that are certainly not Hollows.  Just as the threat of these "things" is starting to escalate, up steps a new Soul Reaper who goes by the name of Senna - an energetic yet strange girl who clearly has the skills to back up her claims, but knows nothing about what squad she is attached to or anything of that sort.  While Rukia heads back to Soul Society to report the odd circumstances into which they've just run, Ichigo is left to question Senna - a task which quickly turns into him taking her on a shopping trip before being forced to protect her from an odd assortment of fellows who seem to have taken a rather specific interest in Senna.

So begins a story which ultimately builds to a climax which threatens both our own world and Soul Society, with desperate times calling for desperate measures.  Of course, it's Senna's real identity which is at the heart of this particular crisis, which only serves to make things even more difficult for Ichigo and company (and more entertaining for us) as time becomes of the essence and the true extent of the threat facing them is unveiled.

These different facets combine to create an enjoyable, well-rounded movie. New character Senna is a blessing; in that she easily carries the broadly more sedate first half of the film on account of her personality and sheer energy to the point where it's a genuine shame that we'll never see her again within the series proper.  Thus fun little romp with some sadder, more emotional undertones makes way for what you might call more traditional Bleach fare as we move towards the film's climax, with the last half hour in particular focusing on almost solely on the kind of bombastic, impressive shounen action which the franchise at its best can leverage so well.  There's still time for the movie to end on a heart-wrenching and ultimately poignant note, to confirm that here is something of a rarity - a franchise's spin-off movie which introduces an insert character who you actually end up caring about.

Visually speaking, Memories of Nobody is certainly a cut above the animation quality of the TV series, albeit not by as great an extent as you might hope for a theatrical movie.  However, this release certainly benefits from an upgrade to the High Definition Blu-Ray format, and despite plumping for 1080i video instead of full 1080p (as you'd expect given the source material) the transfer used here still looks wonderful - it's clean, it's sharp and its colourful.  This Blu-Ray release also features a handful of extras compared to the almost complete lack of additional material on the original DVD release, which combines with that improved image quality to make for a very worthwhile upgrade for Bleach fans with a Blu-Ray player even if they already own the movie.  As per usual for this franchise, both English and Japanese language tracks are good, while the show's background music always goes down a treat even if it borrows almost entirely from the TV series rather than offering anything new.

Overall then, Memories of Nobody certainly counts as a worthy purchase in our book if you're a fan of Bleach.  Despite the film's intention to be watchable for newcomers to the franchise according to its production staff, I'd argue that it fails to deliver in this regard, but for existing fans both new and old it's an eminently enjoyable film that ticks all of the right boxes, via a Blu-Ray release which is an undeniable upgrade over the movie's original DVD appearance.

Extras on the disc consist of pre-production sketches, original Japanese trailers, storyboards, a season one recap feature (with French subtitles only), and an interview with Noriyuki Abe, Masahi Kudo and Ken Hagino; the director, character designer and producer for the movie respectively.

8
A well-paced and produced movie with a hugely likeable insert character ensures that this movie serves up an enjoyable dose of entertainment for Bleach fans.
LATEST REVIEWS