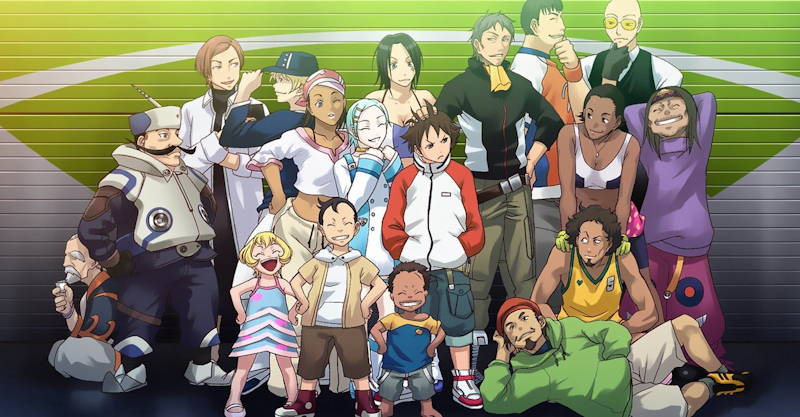 It’s hard to find new superlatives to describe Eureka Seven.  In fact, I look over my previous reviews of the series and find it hard to imagine me writing anything really negative anymore.  With each volume, I try to pick it apart and find something significantly bad to write, if only so that you won’t think me completely hypnotised by the series.  The truth is, Eureka Seven really is just that good!

The reason, I think, is that for the 125 odd minutes that you’re watching, you’re brought completely onboard for the journey.  It’s impossible for me to put the first episode on without knowing that I have time to see them all in one go, and it’s the perfect reason (and arguably the best) to watch any anime I can think of.

With that babbling introduction out the way, I can begin to tell you about what our crew have been up to...

Renton, who’s remained largely clueless about most things for most of the series, is finally starting to grow up!  His realisation that Holland and the others aren’t just a bunch of bohemian care-frees, and that he’s been killing people in the Nirvash, sends him to a point of despair.  He decides to leave the Gekko to find answers and along the way runs into a pair of freelancers called Charles and Ray Beams who invite him to live onboard their ship.  Renton finds two surrogate parents in these two and feels his first sense of peace in a long time, but this happiness is cut short when he discovers that they have some un-dealt with history with Gekkostate.  Eureka on the other hand, still recovering from her incident with the Scub Coral back in the mine, and depressed over Renton leaving, is beginning to notice that she actually does have feelings for him and decides to do something about it.

These two volumes pull on the heart strings like never before and while there are lulls in the pace here and there, they only serve to underline the other episodes where you are rarely given a chance to breath.  The relationship between Renton and Eureka is developing into something that feels real and it’s thoroughly rewarding to watch it grow.  I can’t remember feeling this attached to the chemistry between two characters since Kusanagi and Batou in GitS: SAC and with every episode you’re just willing for the moment when they’ll open themselves up to the other.

As for the additions of Charles and Ray; it was a bold move by Bones to throw us yet more characters into an already full mix and expect us to adopt them, but they pull it off with grandeur and skill.  They could have just turned out to be bolted on, empty characters to give the main cast a bit of a mid series obstacle.  Instead, they have the effect of making us care about what’s going on and further blurring the lines between who our enemies are.

Not content with all this, Bones sees fit to radically change the appearance of Eureka and Talho to align with the change in their attitudes towards other members in Gekkostate.  I’ve never seen an anime do this to such extremes and it’s a ballsy move to play on two very central people in the story.  Again, it works, and you’re just left surprised and impressed by studio Bones’ reluctance to do anything by the book.

I might be setting myself up for a big let down at this rate.  But as each volume has ended so far, and I catch a glimpse of myself grinning from ear to ear, I know I’m safe… until the next volume at least.

The usual affair; Interviews with the Japanese and American voice actors as well as some audio episode commentaries and the standard Beez trailers.