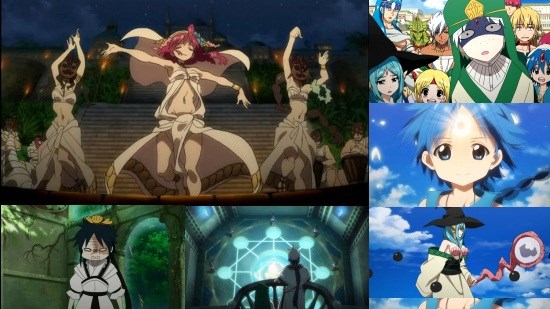 It’s been a cold few months, but Kazé are finally ready to turn up the heat and send us back to the desert as Magi: The Labyrinth of Magic returns with the second half of series one. So, with more shounen action ahead lets dive back in and see if the series can live up to the pretty promising start it had in part one.

Picking up right where part one left off, Magi pulls no punches about chucking you back into the deep end as the Balbadd rebellion continues. Alibaba seems to be getting everything his own way to start with, and it turns out that overthrowing the King is pretty simple when everyone hates them! Alibaba’s solution is for the Kingdom to become a democratic republic instead, but rebellion leader Cassim seems to have ideas of his own. This is where things get a bit weird as Cassim pretty much has everything he wants at this point in the story but then (as if for example, the writers realised there hadn’t been a big shounen action sequence for a few episodes) he takes a total left turn into homicidal maniac alley. Following the clean-up of this battle (no prizes for guessing who wins) the gang heads off to Sindria to hang around with Sinbad and the Eight Generals for a training arc accompanied by some light dungeon crawling as the main plot of the series starts to get into gear.

It’s in Sindria that Magi really seems to come into its own. Yes, on one level it picks up even more of the trappings of a shounen show but at the same time the characters all start to work together as an entertaining cast. As with any shounen show it’s the side characters who steal every scene - Morgiana remains a firm favourite and is clearly the heart of the show as she has a lot of quite poignant moments, particularly when she starts to realise that she’s needed and has a proper place amongst the others. Sinbad comes a close second though with a series of fantastic gags that run throughout all his scenes (not to mention the promise of awesome action to come). In fact, I’d happily watch a series just starring Sinbad and the Eight Generals – which happily we look to be getting, as an OVA based on Sinbad’s origins is due in Japan this year!

Visually the show looks pretty good, with the contrasting backgrounds of Arabian Nights-inspired Balbad, tropical Sindria and the bizarreness of the dungeon keeping things from becoming too stale. The designs for the new characters are brilliant (a crazy enemy in a wheelchair is a personal favourite), though it has to be said that they do go off-model on a fair few occasions through these twelve episodes. As with any shounen series the action has to be good fun to watch and Magi manages to pull this off for the most part - things do get a little bit much on some occasions after characters continuously reveal new powers that could have won them the fight if they’d used them from the start, but then that’s the shounen way.  One thing that does feel out of place is the series approach to censorship. In some areas the violence is up front and centre and then an equally violent scene will be censored, or a pair of breasts will be proudly put on display but then another pair will have a strategic beam of light across them. It just feels a bit unbalanced, as if either the show’s creators couldn’t decide what audience they should be aiming for or as if Kazé had managed to get hold of a copy of the series that had only been partially de-censored.

Don’t go into the series expecting closure whatever you do, as the end of season one is basically a giant setup for season two, as the series commits the sin of introducing a dozen new characters in the last five minutes in the hopes that you’ll keep tuning in to see who they are. The second season finished airing in Japan recently and a third is probably pretty likely - hopefully Kazé will continue to release the series, as Magi is definitely improving more and more and I’m certainly happy to keep on watching these characters for some more adventures. The fact that it’s just a series a year rather than running continuously is pleasant too, as it means there’s less of a chance that we’ll be descending into filler town.  In short, Magi is really good fun - in fact, I’d go as far as to say that it’s the best shounen series around at the moment and its well worth coming back for a second helping!

English and Japanese audio with English subtitles.  Clean opening and closing credits are the only extras.

7
A shounen series that's improving with each and every episode!
COMMENT AND DISCUSS
blog comments powered by Disqus