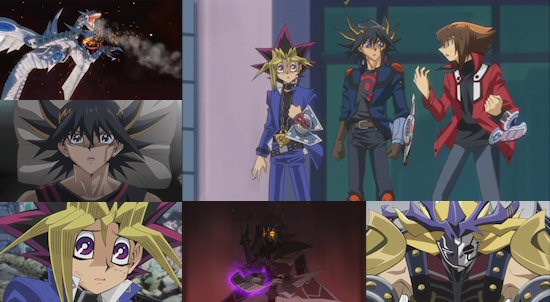 As hugely successful, profitable Japanese franchises aimed towards kids go, Yu-Gi-Oh! is probably only rivalled by the likes of Pokemon in terms of both success and longevity.  If you've lost track of such things thanks to the ravages of time and are currently asking yourself "Is Yu-Gi-Oh really still going?" then the answer is yes, and very much so - this latest theatrical outing for the multimedia money-maker might make claims to being a 10th anniversary celebration, but its manga origins go back fifteen years in its native homeland.

If you're a newcomer to all things Yu-Gi-Oh, be it young or old, you'll be pleased to know that the English language release of Bonds Beyond Time kicks off with a recap of the major tenets of the series (Duel Monsters and all) while also serving to introduce the three major characters you're about to see a whole lot more of.  This recap isn't available to the original Japanese release, which as a rather nice touch to the hardcore fans is also available in hard-subtitled form as an extra on the film's DVD edition.

Once you've hopefully orientated yourself with regards to what Yu-Gi-Oh is all about (or hit the fast-forward button whilst loudly proclaiming that you know all this stuff already), the film itself begins in earnest with Judai Yuki (or Jaden Yuki if you prefer) finding himself in a tight spot before jumping forward in time to catch up with Yusei Fudo, only to find that he too soon ends up in peril.  The cause of all of this trouble is one man alone - an individual with the ability to "absorb" the powers of other people's cards, effectively stealing their Duel Monsters; an action which upsets the balance of space-time itself and causing Neo Domino City to start to collapse before his eyes.

With the entire city staring obliteration in the face, there's only one thing for it in Yusei's opinion - to follow the evil-doer responsible back through time to regain his lost powers.  This journey leads him almost immediately to run into Judai and another scrap against their new shared nemesis, before being led into jumping further back into the past and a meeting with a certain Yugi Muto.

It's here that our three heroes prepare to face off for a battle with the entire future of the world hanging in the balance, and it's at this point that the latter half of the film turns into one humongous card game, full of twists and turns that will most likely leave anyone unfamiliar with how said card game works baffled at best, and suspicious that everyone involved is just cheating and making up the rules as they go along at worst.  This is where things get exciting for those into Yu-Gi-Oh, yet an impenetrable blur of tit-for-tat talk of "traps" and "graveyards" that leaves the rest of us (myself included) feeling just a little bit giddy.

It's rather difficult to review what is ultimately a children's movie without sounding like either a smug, heartless so-and-so who doesn't "get it" or an easy touch who will let anything fly in the name of kid's entertainment.  Nevertheless, from an objective point of view Bonds Beyond Time can only be praised for keeping its focus and plot progression impeccable tight, ensuring that the film's running time is short and there's virtually no padding in sight.  This makes watching the movie an intense, non-stop experience that will surely keep fans of the franchise glued to their seats from beginning to end throughout its riot of colourful and largely well animated (ignoring some horribly cheap-looking use of CG) action and card-flinging.

The downside of this break-neck pace is that it soon becomes clear that the film is simply rushing through to get to its big, climatic battle and the chance to sell some more playing cards to its enthralled audience - the whole time travelling aspect of the film is undeniably cool (especially in this period of entertainment marked by the resurgence of Doctor Who), but it's not only a wasted opportunity but also riddled with plot holes that even kids will see through as it serves only to bring its three characters together at one time and nothing more.

Despite that, even for someone entirely unfamiliar with the world of Yu-Gi-Oh such as myself there's at least some simple entertainment to be had from the film and its simple mission to impress people and make them buy things - on top of that, the movie's English language interation benefits from that initial explanation of the franchise's world, and also boasts an impressively good dub which is arguably preferable even to the original Japanese audio, complete with a much, much better and more powerful audio transfer.  The only thing we didn't get to run the rule over here is the film's boast as the first ever 3D anime to hit the UK, given that our DVD release is shorn of such high-tech delights - let's just say that I didn't end up with a headache from watching the DVD version and leave it at that, shall I?

Ultimately, if you're a fan of Yu-Gi-Oh (or have a child or sibling that is) then I would wager you'll be picking up this release regardless of your own personal preferences - the good news is that even if you don't have the foggiest idea about the franchise watching this movie isn't a complete write-off in terms of simple and occasionally daft entertainment.

English audio.  Extras on the DVD release consist of a trailer for the movie, the "Bonds Beyond" recap feature, and the original Japanese version of the movie featuring Japanese audio with English subtitles.

The Blu-Ray release of the movie features both 2D and 3D versions of the film's English language release.

7
It's clearly only of real interest to existing Yu-Gi-Oh die-hards, but if you count amongst that number this is a break-neck and colourful slice of entertainment.
LATEST REVIEWS